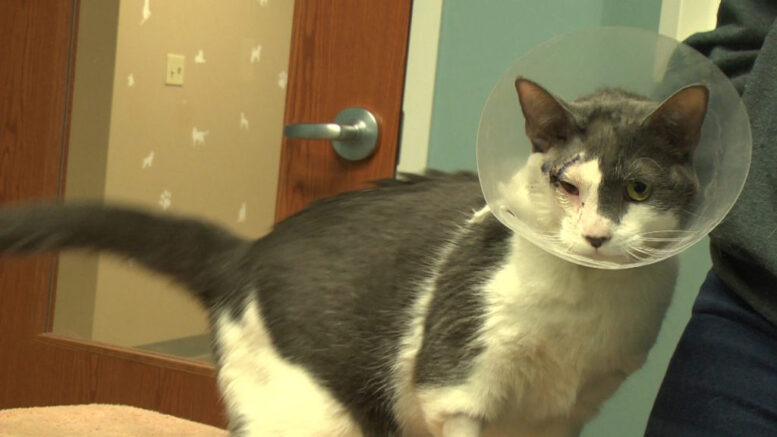 ESCANABA — The affectionate little guy shown in this video is named Jinx. At just about a year old, he’s already been through a lot.

Jinx was born with an unusual and extremely painful eye condition. One eyelid was missing, and the other eyelid was attached to the embryonic band across the cornea of his eye.

“The cat could not close his eye properly,” explained Delta Animal Shelter Manager Susan Gartland. “It was watering, and he was in an extreme amount of pain, as you can imagine. When you have an eyelash or anything in your eye, it’s extremely painful. Jinx came to the safety of the shelter and we knew immediately we had to help him. And that is our mission, to help any animal that comes to us in need.”

Jinx was brought to the Delta Animal Shelter in Escanaba. He was then sent to Wisconsin to undergo surgery to repair his eyelids.

“They detached his one eyelid that was connected to the cornea, providing immediate relief,” said Gartland. “Then they reconstructed the missing eyelid with the flap of his ear, which is really interesting medically that they are able to do that.”

The surgery was a success. According to Gartland, eventually it won’t even look like Jinx ever had this condition. Once the healing process is finished, Jinx should be able to live a normal life without any pain.

Delta Animal Shelter is dedicated to getting animals like Jinx the medical care that they need. They are able to do so thanks to their emergency medical fund. However, when Jinx arrived at the shelter, Gartland says they knew they needed to act quickly—so they didn’t have time to raise funds for his surgery.

“With Jinx, we didn’t have time to do any fundraising ahead of time,” said Gartland. “Our goal was to get him out of pain and to get him fixed as quickly as possible. So we are always looking to replenish that emergency fund, both to offset Jinx’s surgery fees and to have a little bit of a cushion in case situations happen like this again. It really is our mission to be the caring voice of animals in need, and certainly we’ve proved this to be the case with Jinx. He is the nicest cat and, boy, he deserved that second chance.”

The Delta Animal Shelter is grateful for any community donations to their emergency medical fund that will help Jinx, and animals like him, to get medical attention. Gartland says this community has a heart for animals, and that they always come through for furry friends in need.

“This community, they care about animals,” said Gartland. “We’re a very compassionate community, and this is a community shelter. So when there is an animal that needs help, this community of business owners, of people, of volunteers, they’ve always stepped up to the plate and said that Delta County is going to do what’s best for animals.”

Jinx has a re-check appointment later this week. Once he’s healed up and good to go, he’ll get his second chance at life in a home of his own.

“We knew we had to do this for him,” Gartland said. “He could not live in constant eye pain the rest of his life. I’m very surprised at his personality and how nice he is, knowing that he has been in a terrible amount of pain every single day. Now he’ll live completely pain–free for the rest of his life.”

Wildcats aiming to have breakout season

Delta Animal Shelter is getting a new home