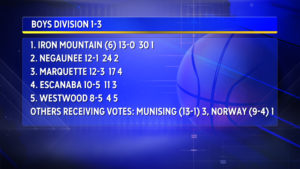 In boys’ Divisions 1-3, Iron Mountain is still on top. What else is there to expect at this point? They’re an incredible team with incredible players in the middle of an incredible run. They’re still undefeated. Negaunee is at number two followed by Marquette, Escanaba, and Westwood in that order. By the way, the Patriots and Miners play each other on Wednesday, so that could definitely shake up the standings if Westwood manages to win. Munising is just off the list this week with Norway also receiving some votes for the first time all season. 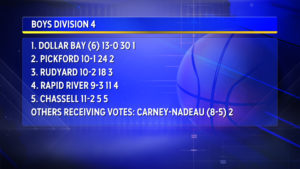 In Division 4, Dollar Bay, they’re on top once again, followed closely by Pickford and Rudyard. The Rapid River Rockets are the only three loss team in the rankings this week with Chassell just behind and Carney-Nadeau just off this week’s rankings receiving two votes total. 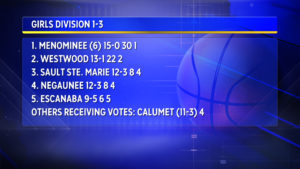 On the girls’ side, Meonominee; they’re still undefeated. It would take a monumental loss by the Maroons to knock them off their top spot at this point. Westwood is still at number two, and you can bet that early season loss to Menominee is haunting them, and maybe even motivating them as the season progresses. Sault Ste. Marie, Negaunee, and Escanaba round out the top five. Calumet received some votes, but not enough to crack the list. 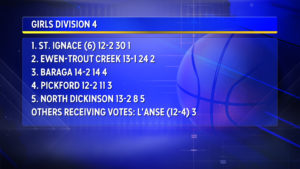 And in Girls’ Division 4, St. Ignace may have suffered their second loss of the season, but they still hold that number one spot; unanimously, too. Ewen-Trout Creek, despite only having onle loss on the year, currently sit at number two. One more loss for the Saints and maybe we could see those top two teams swap places for the first time this season. Baraga comes in at three, Pickford fout, and North Dickinson five. The L’Anse Purple Hornets also received three votes this week.