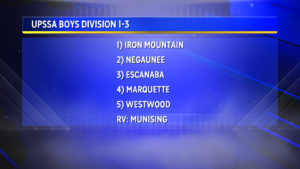 Another week brings another UPSSA poll being released. In boys’ basketball Divisions 1-3, Iron Mountain continues to hold onto that top spot. They’ve had the number 1 ranking since the start of the season, and if their win last week over number 2, Negaunee, is any indication. They won’t be giving up that ranking any time soon. Escanaba, Marquette, and Westwood round out the top five, in that order. Marquette and Westwood actually played each other earlier this week on Westwood’s home court. The Redmen used a 15-0 run in the fourth quarter to pull away from and eventually defeat Westwood. The only other school to receive any votes was Munising. The Mustangs have had a tremendous season, but one loss combined with a rather low strength of schedule keeps them just outside the top-5. 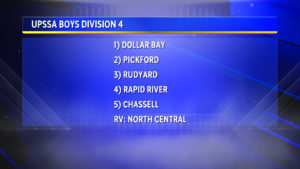 In Division 4, Dollar Bay continues their dominance. They’re still undefeated on the season. Pickford, who started off the season ranked toward the bottom of the top-5, have slowly crept up the rankings as the year has progressed, finds themselves all alone at number 2, only looking up at Dollar Bay now. Rudyard, Rapid River, and Chassell come in at 3, 4, and 5, respectively. Only North Central received any other votes. On the girls side, for Divisions 1-3, Menominee continues their undefeated season. They’re still at number one. The Maroons are followed closely, though, by a pair of 1-loss teams in Westwood, whose only loss came at the hands of Menominee, and Sault Ste. Marie. Negaunee sits at number 4 after being ranked 5th just one week ago. The Mo’s come in at 5. Marquette was fourth last week, but has since fallen out of the rankings after a loss to Menominee. Calumet also received votes, but could not crack the top-5. 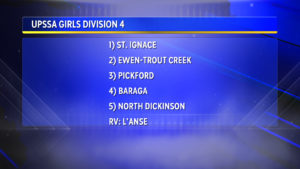 And in girls Division 4, St. Ignace continues to dominate the competition. Their lone loss, not hindering them in the UPSSA rankings. Ewen-Trout Creek comes into this week ranked number two with Pickford, Baraga, and North Dickinson all close on their heels. The only other school to receive any votes were the Purple Hornets of L’Anse.