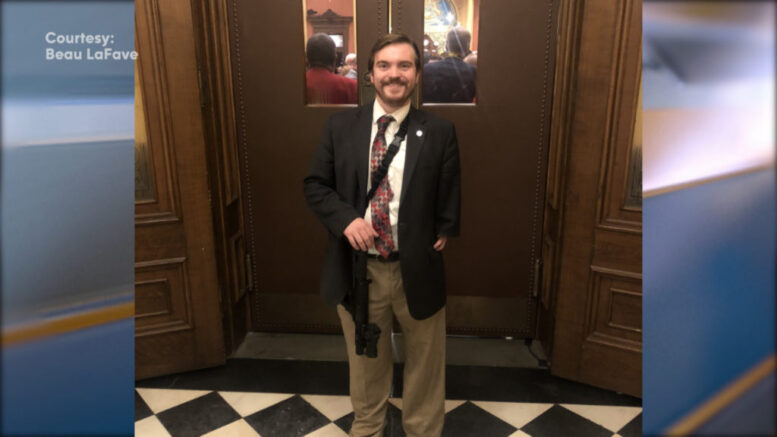 LANSING — State Representative Beau LaFave’s home in Lansing was recently broken into and two guns were stolen, and one organization has released a statement after hearing of the theft that took place.

LaFave said that he arrived back at the home in Lansing after being in the Upper Peninsula to find a rock had been thrown through the window where the burglar reached in and unlocked the door. Two guns, including the gun that LaFave had on him at the Governor’s State of the State address last week, were stolen from the home.

This prompted the 906 Dems to release a statement about safe and proper gun ownership and storage, how LaFave’s irresponsibility with firearm storage has potentially put others in danger, and that as an elected official he should be doing better for his constituents.

In the statement, the 906 Dems stress the importance of keeping firearms locked up when they’re not being used, especially when there are children that may be in the residence.

“Responsibility is the number one thing, make sure that you’re keeping your firearms locked up,” Chapman said. “We are all pro-Second Amendment in the 906 Dems, and a majority of us own firearms, and we want to make sure that people are kept safe. The most dangerous thing here is that those firearms can be used by a bad actor in a crime. Representative LaFave is a legal firearms owner, he’s allowed to own firearms, and he’s a law abiding citizen. So it can happen to anybody, if it can happen to a representative, it can happen to you. So please, keep your firearms safe, keep them locked up and away from children.”

LaFave spoke with us about the stolen guns and said that he does not think that he was targeted in anyway, noting the higher crime rates that happen in Lansing versus cities around the Upper Peninsula.

“Lansing has a higher crime rate per citizen than any U.P. city that I’m aware off, so unfortunately it was just bad luck,” LaFave said. “I think this whole situation just further reaffirms my ardent support for law abiding citizens being able to keep and bear arms. No amount of laws, no amount of security is ever going to keep guns out of the hands of criminals. They’ll do anything to get their hands on them. The only way to protect yourself is to have your own.”

LaFave also responded to the statement released by the 906 Dems, saying they’re not being realistic when it comes to home defense.

“Whoever wrote that thing clearly doesn’t understand what the purpose of home defense firearms are,” said LaFave. “You never store ammunition separately from home defense weapons. This idea that I would have a weapon, someone is trying to break in in the middle of the night, I grab the gun and run out to the garage, grab the bullets and then defend the home is insanity. Nobody does that. So whoever wrote that press release clearly doesn’t know anything about home defense.”

LaFave also said that the police are investigating the robbery, and that he will be adding additional home security systems for any future issues. Read the full statement from the 906 Dems below:

The most significant and widely abused gun safety rule is one that most reasonable and mature gun owners practice on a daily basis and realistically goes without saying:  SAFE and SECURE STORAGE!  However, this is a full-time responsibility.  It is quite evident in light of the recent theft of Representative Beau LaFave’s weapons, that this is NOT a major consideration for him.

A firearm should always be secure and ammunition stored separately so that they are not accessible by unauthorized users, including minors and thieves.   These practices include locking guns in a secure place such as a gun safe or cabinet and using safety devices such as trigger or cable locks.

Responsible gun ownership also refers to someone using and displaying their weapons safely.  Openly carrying a weapon in a public place and/or making a public spectacle is not considered wise nor responsible gun ownership.   Taunting folks and challenging them to “come and take it” as did Representative Beau LaFave is a very dangerous and immature action.

The theft of LaFave’s weapons from his Lansing home is not only a very loud and clear example of immaturity and irresponsible firearm safety, it should also serve as a reminder to all that bragging, boasting or otherwise displaying unnecessarily your firearms can also make you a target.  Not knowing where these weapons have landed has put the public in danger.  The responsibility of possible evil actions surrounding these weapons lies squarely on Representative Beau LaFave.

We now must fear whose hands these weapons are in and worry about what sort of future tragedy this theft may bring.  LaFave’s immature gun ownership has not only created an additional burden for law enforcement as they investigate this crime, it has also created unnecessary fear and worry.

It is again time that we, the 906 Dems,  hold this man to a higher standard and demand that he start showing better judgement and respect for the office he holds, the State of Michigan, Governor Whitmer, his fellow legislators, the Upper Peninsula and more importantly, to the 108th District.  (Delta, Dickinson and Menominee Counties)  We once again demand an apology to his constituents.  The example he has set is not worthy to follow.