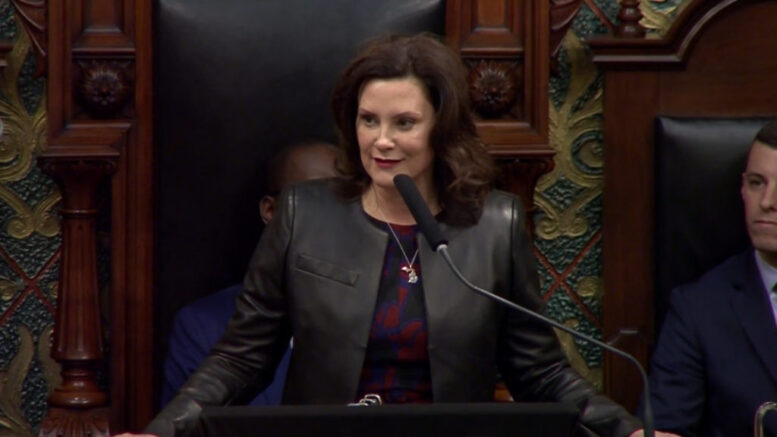 LANSING — Governor Gretchen Whitmer gave her State of the State address Wednesday night, where she talked about several different issues that she wants to address around the state. In the address, Governor Whitmer focused in part once again on an issue she’s been trying to tackle since her campaign began back in 2018: fixing the roads.

Her newest plan to address roads includes selling bonds that will help fund the construction on infrastructure that she says needs to be addressed the most throughout the state.

“Tomorrow I will ask the State Transportation Commission to issue State Road Bonds, so we can start fixing the roads now. My ‘Rebuilding Michigan’ plan is financed without an increase at the gas pump, and it will do three things: save time, save money, and save lives. Since it doesn’t require the legislature to act, we can get started right away, and that’s important. Cutting down on the time we take to repair Michigan’s most frequently travelled truck lines and state roads is fiscally responsible.”

“Last night the governor mentioned several important reforms that the Legislature and her administration were able to work together on last year, and I am hopeful that we can build on those successes as we begin this year’s work.

“That the governor already decided to act alone, however, to borrow billions of dollars to fix only some of the Lower Peninsula’s roads concerns me. By going it alone, she is abandoning the local community roads, especially in the U.P., that arguably need the most work. So, while I appreciate her urgency, we need a real long-term plan to fix all the roads, and I am eager to work toward a solution.

“I also appreciated the governor’s comments on education and am eager to learn more about how we can work together in support of apprenticeships programs, skilled trades training, and colleges and universities to better prepare students for the future.

“That said, the governor’s speech was otherwise light on specifics concerning many other big issues facing our state, and the U.P. specifically. From Line 5, to agriculture, forestry, and manufacturing, there are many challenges we all face, and I am ready to work together to overcome them.”

“It’s problematic to hear that 43 percent of residents in our state and the U.P. live at or below the poverty level. Michigan may have low unemployment rates, but it’s apparent we need to focus even more on keeping and creating living-wage jobs.

“Lately, there’s been a lot of focus on the partisan divide in our country. After seeing more legislators willing to shift our U.P. road funding dollars to their downstate communities, and hearing the governor want to bond to fix our state roads rather than work with legislators on a long-term plan, it’s clear it’s more of a rural-urban divide.

“I support the governor’s plan to lower prescription drug costs, invest more in our schools and crack down on payroll fraud, but after tonight’s address, it’s clear that the needs of rural Michigan need to be acknowledged and made more of a priority in our state.”