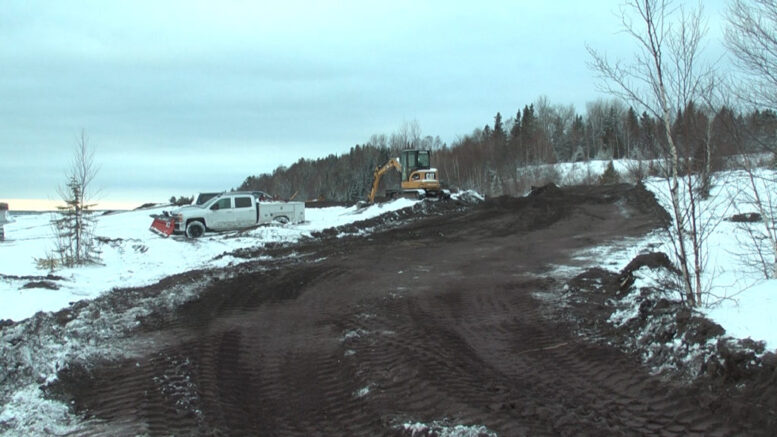 KEWEENAW COUNTY — Heavy equipment operators are expected to begin working this week to dredge stamp sands from in and around the Grand Traverse Harbor in Keweenaw County.

Over the past roughly 100 years, historic copper mine tailings from the Wolverine and Mohawk mines – called stamp sands – were deposited at a milling site along Lake Superior, located in the community of Gay in Keweenaw County.

Since that time, the stamp sands have been moved by winds and waves south down the shoreline roughly 5 miles, inundating natural sand beach areas and threatening to cover spawning habitat and recruitment areas important to Lake Superior whitefish and lake trout in and around Buffalo Reef.

Over the summertime, workers cleared the harbor of the dark-colored stamp sands, but late season fall storms – coupled with high water levels on Lake Superior – have worked in concert to again choke the waterway.

“Sands will be removed from the harbor and also from the beach, up to 1,000 feet north of the breakwater, to help keep the harbor open,” said Jay Parent, district supervisor of the Michigan Department of Environment, Great Lakes and Energy’s Water Resources Division in Marquette. “We want camp and homeowners along the beach to know we will be doing this work over the winter months so as not to interfere with summer camp use.”

The dredging efforts are part of a wider strategy to address the issue.

“Anything we do now to remove stamp sands from the beach and harbor will help reduce the threat to Buffalo Reef overall,” said John Pepin, Michigan Department of Natural Resources deputy public information officer. “Meanwhile, the Buffalo Reef Task Force is evaluating options to reduce the amount of short-term dredging required, while refining estimates of how much dredging will be needed moving forward.”

In addition to the dredging that took place over recent months, crews have worked to move the stamp sand pile at the original deposit site back from the shoreline at Gay.

“These efforts were undertaken to help cut-off the supply of stamp sands feeding down the lakeshore toward the harbor,” Parent said. “Meanwhile, the multi-agency task force is continuing to develop options for a long-term solution to the problem, hoping to save the important fish habitat associated with the reef.”

Snowshoe events set to ring in the New Year