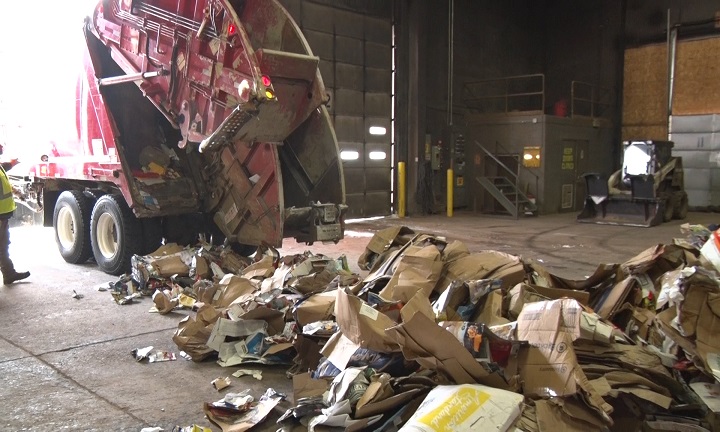 MARQUETTE COUNTY — Concerns from the public have come to the Marquette County Solid Waste Management Authority of recyclables and trash being mixed when picked up.

“We have had a few calls regarding seeing us throw recyclables into the back of a garbage truck,” said Gordon Lamere, Co-Owner of North Country Disposal & Septic. “Our garbage trucks are set up for dual pick up. It has trash on one side and recyclables on the other side of the truck. It has two compartments and we want people to make sure that people understand that. When people see trash and recyclables being thrown in the back of the truck, they need to know it is being separated into two different compartments and is coming to the landfill and is being recycled.”

Many different companies such as, North Country Disposal and Septic, have created good relations with the Marquette County Solid Waste Management Authority. These different companies utilize trucks that have dual collection capabilities. These capabilities consist of two compartments which help produce quicker results of getting waste and recyclables off the curbside. These two compartments can be mistaken as one from afar and can be misleading to some. The Co-Owner of North Country wants members of the community to know that the recyclables are being effectively and properly taken care of.

“We just want to reassure everybody that the material we are taking from recycling is being recycled,” said Lamere. “We want them to make sure that when they see us throwing stuff into the truck that we do pick up both materials (waste and recyclables) at the same time, but it does get deposited in two different locations.”

It is also important knowing to continue to recycle and allow the Marquette County Waste Management Authority to continue recycling those materials. The facility has continued to invest into recycling which will help the communities improve the surrounding environment and reduce unneeded waste that can be reused for the future.

“We got a large investment into upgrades on our recycling program,” explained Bradley Austin, Director of Operations at the Marquette County Solid Waste Management Authority. “I think that it is important that we start at the curb with the residents and placing curbside materials properly. I also want to give assurance that this material is being collected by the private haulers in the county and in turned being delivered to us. These materials are then processed and going to markets throughout all of the Midwest.”