Tuesday, October 15th, marks the release of the latest UPSSA polls for Week 8 of High School Football in the Upper Peninsula. 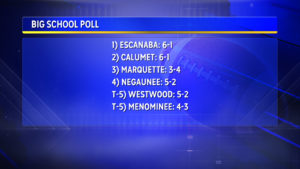 The big change in the big school poll is the drop of Menominee (4-3) and the rise of Marquette (3-4). Of course, the two teams played each other last week with the Redmen coming out victorious in a one score game, 28-21. Marquette snatches the number three spot in the polls from the Maroons, while the Maroons drop to a fifth place tie with the Westwood Patriots (5-2), who themselves are in the middle of a four game win streak over tough opponents: Ishpeming, Manistique, Hancock, and L’Anse. Escanaba, Calumet, and Negaunee all stayed put in their placements from this time last week: Escanaba first; Calumet second; and Negaunee fourth. It is also worth noting that despite Escanaba and Calumet having the same record (6-1), the Eskymos received all but one first-place vote. 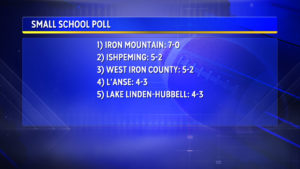 In the small school poll, no surprise at who comes in at number one. The Iron Mountain Mountaineers have been phenomenal all season long, and they continued their strong 2019 campaign last weekend with a big win over the Hancock Bulldogs. The Ishpeming Hematites though, move up to number two in this week’s poll after defeating the, now third place, West Iron County Wykons, by a final of 28-0. So, those teams have swapped places from Week 7’s poll. L’Anse and Lake Linden-Hubbell, both 4-3, round out the top five, respectively. 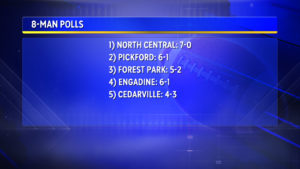 In the 8-man polls, no major changes in the rankings. In fact, the poll remains exactly the same, not a single change from last week. North Central at one; Pickford at two; Forest Park, Engadine, and Cedarville at three, four, and five.