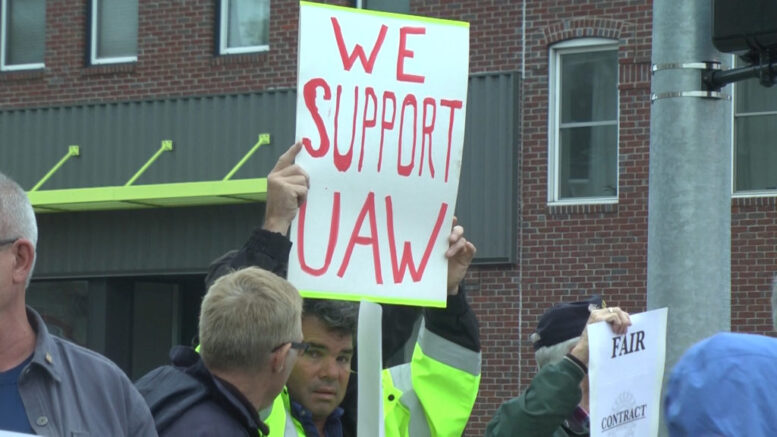 MARQUETTE — Since mid–September, 46,000 United Auto Workers union members have been on strike against General Motors.

Friday morning, a group of UAW members held a rally in Marquette to show their support for their fellow workers.

The rally gathered at 10:00 a.m. on the corner of West Washington Street for a few hours despite the drizzly weather. They brought signs showing their support of workers on strike and calling for fair wages. Cars drove by throughout the morning, honking in support of the rallying UAW members.

UAW workers also put on rallies on Friday in Detroit. Upper Peninsula Regional Labor Federation President Mike Thibault says his group wanted to show those workers that their fellow workers in the U.P. have their backs.

Michigan AFL–CIO President Ron Bieber says that this rally was also a show of support for workers across the country. He says that workers have seen success from strikes in other industries, and he would like to see the same happen for UAW workers.

“Workers have had enough of high pay for CEOs vs. stagnant wages for working people, and it’s time that workers got a raise,” said Ron Bieber, President of the Michigan AFL–CIO. “All across the country teachers have gone on strike and won, and convenient store workers and nurses have all said enough is enough. Labor stood behind them and they won, and that’s what these UAW workers are doing now. They’re standing up for all of us and for themselves. Their contracts were up so they’re fighting for a fair shake for their workers, but in effect it’s for all workers.”

Those who participated in Friday’s rally hope that workers on strike in Detroit will know that they are supported in the Upper Peninsula. They also hope that rallies like this one will bring about the change those UAW members have been fighting for.

GM job cuts and their potential impact on the Upper Peninsula