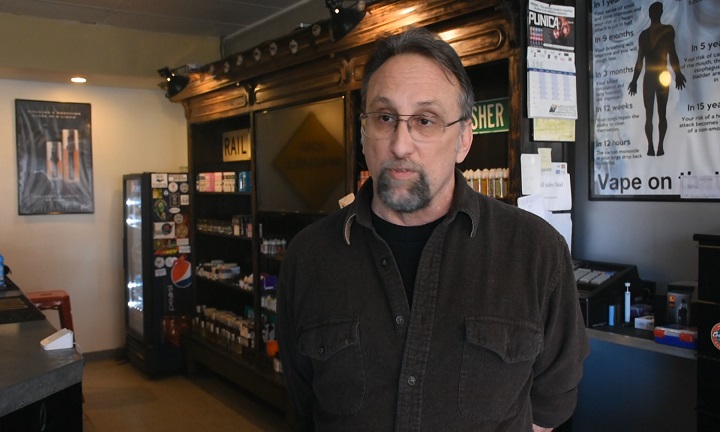 HOUGHTON — A lawsuit filed against the vaping ban was field on Wednesday September 25th, by a local vape shop owner in the City of Houghton.

Marc Slis, the owner of 906 Vapor in Houghton, has filed one of the first lawsuits against the Gov. Gretchen Whitmer’s vaping ban.

Not only will this affect Marc’s livelihood but it will also be affecting so many others who use these products to get off cigarettes.

“The reason for the lawsuit is due to the fact i will lose my business, my employee will lose his job, i will most likely have to file for bankruptcy and most importantly my customers who are here to quit smoking will have no alternative and have to go back to smoking,” explained Marc Slis, Owner of 906 Vapor. “There are alternative sensation methods and the majority of them prior to coming here, just like myself, have tried them all, multiple times for years if not decades. So their only alternative is going to be going back to smoking and that carries a 50% mortality rate. That is the motivation behind doing this lawsuit.”

This lawsuit is working towards more sensible regulations instead of an all out ban. Marc Slis is also hoping that it can generate the required debate to get the public and officials involved so they can make a better decision as well.

“Allow the public an opportunity to actually express their opinion, to allow legislative debate, which all of that has been circumvented by this order,” said Slis. “I personally don’t believe anyone in the state believes that the governor should  arbitrarily alone decide the fate of 2.6 million Michigan smokers, 418,000 people vaping and a majority of them doing it to quit smoking.”

Most are worried that when October 2nd rolls around that they will see similar actions taken against them in the state of Michigan.

“We are seeing it in states like Massachusetts where immediately following the order that came down, police entered several businesses, if not all of them and forced people out immediately,” explained Slis. “So we are worried the same thing is going to happen here.”

Now the difference between Michigan and Massachusetts is the type of ban. Massachusetts decided to go with a four month ban on all vaping products.

It is also the most extensive state-level crackdown on e-cigarettes since a mysterious illness related to vaping product has killed over 7 individuals.

These incidents among over 500 more illnesses have been pointed out by lawmakers, Rep. Beau Lafave and State Rep. Steven Johnson, which a majority of the cases are most likely linked to black market cannabis cartridges.

Most medical experts are increasingly focusing on the vitamin E acetate, an agent used to dilute and thicken THC oil in cannabis vape cartridges.

When vitamin E reaches a high temperature, the oil transforms in to a vapor. When the substance is inhaled, it reverts back to oil in the lungs, which can cause pneumonia. This vitamin has been found in nearly all the samples from patients in New York who have fallen ill.

Now this does not change the fact that underage youth have seen an increase in vaping, especially with flavored products.

According to the FDA, kids whose first tobacco product was flavored are more likely to become current tobacco users, rather than those whose first product was tobacco-flavored. This adds to the reason why the ban is targeting flavors to protect the youth of the state from engaging in these activities, but allows the continued use of tobacco flavored juice.

Although, there are laws prohibiting individuals who are not of age to buy these products from vape shops, gas stations and convenient stores. There are also laws for similar products such as cigarettes and alcohol that are sold in similar stores.

Yet every year we see many death related to cigarettes and alcohol not only in youth but adults as well.

According to the Center for Disease Control (CDC), cigarettes cause 480,000 deaths per year in the United States, including more than 41,000 deaths resulting from secondhand smoke exposure.

While according to the National Institute on Alcohol Abuse and Alcoholism, an estimated 88,000 people (approximately 62,000 men and 26,000 women) die from alcohol-related causes annually, making alcohol the third leading preventable cause of death in the United States.

Dreaming of a Summer Day