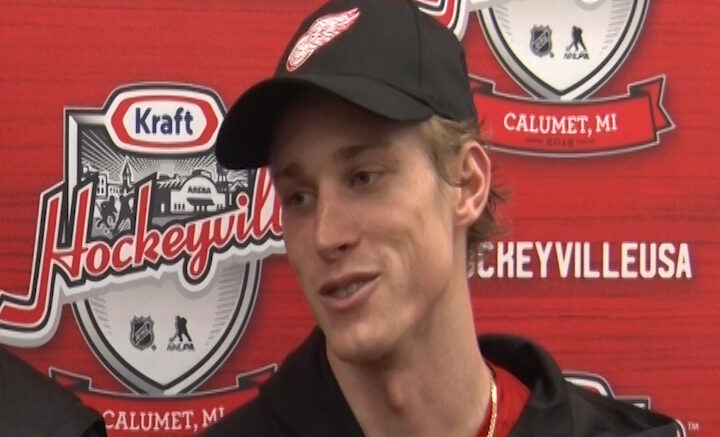 CALUMET — The Red Wings are the home team in Michigan, but there are some players that have roots even closer to Calumet. It was sort of a homecoming for a few of the big leaguers, as both teams have former U.P. collegiate players.

The defending Stanley Cup Champions, the Blues, have Mitch Reinke, who played college hockey 12 minutes down the road from Calumet, at Michigan Tech.

“Well I think you see the fans are very passionate, that was something I experienced at Michigan Tech. Tons of people came out, even for morning skate, so it was a lot of fun,” said St. Louis Blues defenseman Mitch Reinke. “It’s a quicker game. I’ve noticed the sticks are a lot better at this level, so that’s just one thing I’ve picked up on.”

As for Detroit, they have a pair of Wildcats who will be wearing the winged wheel tonight, and they both are excited about being back in the UP.

“To play here for the Red Wings and to be back in the UP in front of a lot of fans and people we’ve played in front of is really special,” said Detroit Red Wings forward Troy Loggins.

“I’m excited,” said Red Wings forward Dominik Shine. “It looks really nice, and I think it’s going to be pretty fun. There was one in Marquette when I was at school there and it was a pretty good time, so I’m excited to be here.”

Tonight isn’t quite Northern vs. Tech, but it is expected to be an intense exhibition game.

NMU reaction to series vs. Falcons

Homecoming victory for the Cats