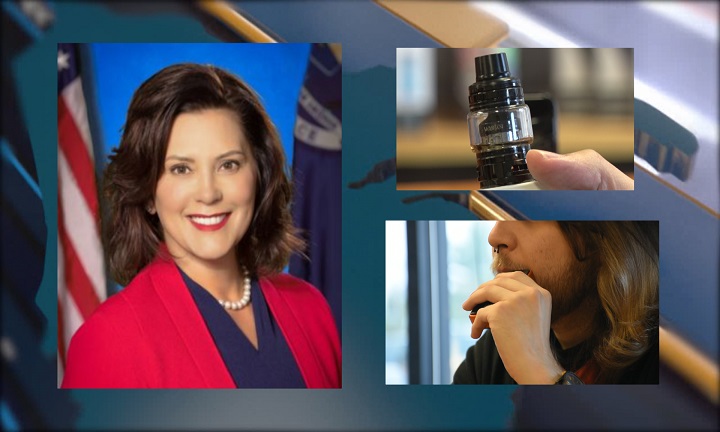 MARQUETTE — In 12 days, retailers for flavored vaping-related products will have to get rid of all products being banned in an emergency decision. This ban was put into place by Governor Gretchen Whitmer, who believes flavored vaping products are affecting Michigan’s youth.

Although the emergency ban has consistently been rushed through and the time frame has changed a multitude of times, according to local vape shop owners. One such owner is Eric Curtis, who is the owner of Rustic Vapor, and is one of the main retailers in the Upper Peninsula for vape-related products.

“12 more days,” said Eric Curtis, Owner of Rustic Vapor. “The Governor signed her executive order Wednesday. She originally said we would have 30 days to sell all of our stock. So when she signed it, she made a retroactive from two weeks when she announced it. So now we only have 14 days from Wednesday, so now we only have 12 more days.”

Even though it is a short time frame, due to the ban being declared a health emergency, it will continue to move forward. Many others states are also looking to make similar rules and regulations as well.

“It is a very short time frame, but it is a declared health emergency from the Department of Health and Human Services,” explained Mike Prusi, Director of the Northern Governors Michigan Office. “I think the federal government is taking similar actions, as well as 14 other states. Michigan is not all alone, even though we were the first ones out of the gate.”

The ban is being pushed forward to help curve deaths and illnesses of young individuals.

In the past few months, a multitude of individuals have died and/or became ill due to vape-related products. So the ban has been justified to help prevent any more of these incidents from happening.

“Vaping illnesses being uncovered and some deaths being attributed to the use of vaping products, I think the intent here and rationale is to protect the health of our citizens and especially our young people,” said Prusi.
The ban doesn’t get rid of all vaping-related products.
It will only be taking down flavored vaping products that may be looked at as enticing to children.

The ban will be targeting any nicotine-related products that use flavoring such as candy, bubblegum, cocoa and among many more different possible flavors. However, it will not affect traditional flavored tobacco products, such as menthol.

“I believe there was a change that indicated that there would not be an impact on traditional tobacco products,” explained Prusi.

With the ban mostly targeting small businesses that only sell reputable products, these local shops will have to get rid of their products after the 12 days are up.

This will not only be a loss of revenue for the state and federal government, but it may even put many owners in positions to close shop or even go bankrupt.

“Sales tax revenue, all the employment tax revenue, state and federal; what this federal order does is shut all of that revenue down,” explained Curtis. “So the state is going to lose tens of hundreds of millions of dollars for the rest of the year. The hard thing is that I have a dozen employees that don’t know if they have a job in 12 days. So we are just going to try and sell all of the flavored e-liquid we can until the ban comes. Then I will have to probably destroy thousands of dollars worth of product.”

Local shops in the U.P. also feel as if they have no voice in the matter of the subject.

Many vape shop owner express that this emergency order denies them to talk about how their products are shown to be a less harmful alternative to combustible nicotine products.

“The governor and her executive order pretty much placed a gag-order on any retailers and re-sellers of any alternative nicotine product or e-liquids and vaping,” said Curtis. “So we can’t talk about these studies that prove vaping is a great harm-reduction tool. But they can in turn say whatever they want about our industry without any consequences.”

Even some U.P. representatives are seeing this emergency ban as a rush to be the first, but may cause more harm in the end.

“You know there was 400 people that got hospitalized and over 86% of them related to the black market,” explained State Representative Beau LaFave, (R) 108th District. “When you ban these flavored e-cigarettes above ground, you then force them below. Where we now have empirical evidence that this much more dangerous to public health.”

For more information on the rules of the ban click here.

Update on the controversy of flavored vape products