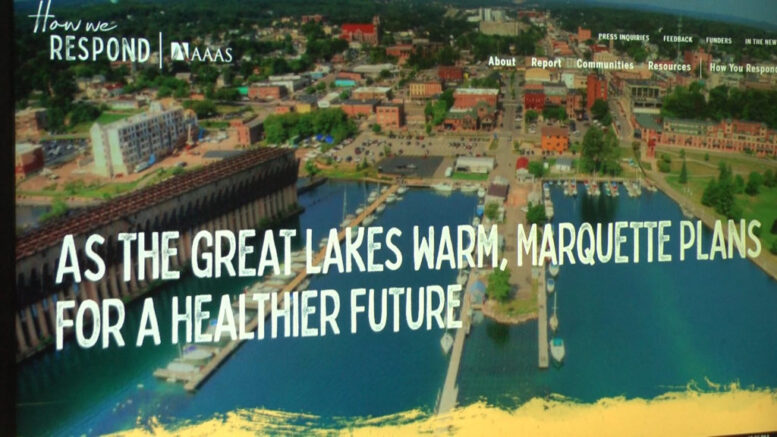 MARQUETTE — A report was released today by a national science organization on how different communities, including Marquette, are working to respond to climate change.

The American Association for the Advancement of Science (AAAS) released a multimedia report highlighting communities across the country that are taking steps to address the effects of climate change in their areas.

The report is called “How We Respond.” Marquette was one of 18 communities studied for the report. Specifically, Marquette was chosen for its work to address the effects climate change has on public health. Other communities were chosen for their responses to issues such as renewable energy, transportation, and flooding.

Brad Neumann, a Senior Extension Educator at Michigan State University, has been working with Marquette County to plan ways to combat climate change issues in the area.

“What’s unique about the project is that we’re looking at climate change impacts through a public health forum,” said Neumann. “We’re making sure we understand what some public health officials refer to as ‘climate health pathways.'”

Neumann says one of those climate health pathways being researched is the combination of increasing extreme rainfall and rising temperatures on bacteria in Lake Superior.

“When there’s a large storm event we see this flashing of storm water,” explained Neumann. “And we know through beach monitoring that bacteria levels will spike after a large rain event. And when you couple that with higher temperatures during the summers, it’s creating a situation where those could combine and create more instances of health watches and beach closures if there is a spike in harmful bacteria levels.”

The “How We Respond” report outlines some of the current efforts being made to combat rising bacteria levels and other public health issues in Marquette, as well as what plans are in the works for the coming years. If you would like to read the report for yourself, you can find it here.

How does Climate Change affect the Upper Peninsula? #ABC10Feature