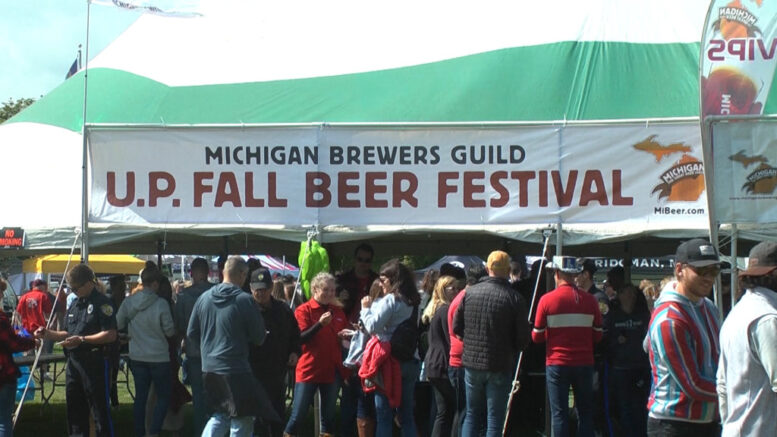 Every year breweries from the Marquette area and all over Michigan come together to distribute their craft beers and to celebrate the beer culture across the state.

“It has certainly grown over the years,” said Scott Graham, Executive Director of the Michigan Brewers Guild. “The first year 11 years ago, we had less than a thousand people here and far fewer breweries. It was a really nice event, but it’s grown into what you see today with more than 4,000 people and a hundred different breweries and hundreds of different beers. So it’s certainly grown over the years, but one thing is consistent, and that’s that people are still really nice, having a good time, and enjoying themselves with friends over a nice, tasty craft beer.”

Graham says that not only is Beer Fest beneficial for the brewing community across the state of Michigan, but also for the Marquette area and local businesses.

“It does a lot for the brewing community,” said Graham. “We’ve seen a nice Beer Week coalesce around the event, so there are a lot of events in town at the breweries and other restaurants and bars kind of celebrating Michigan beer and Michigan beer culture. But certainly the event brings people in not only from the local area, but from downstate, from Wisconsin, and from other areas. So it definitely fills some hotel rooms, and restaurants are busy, and it brings a lot of bodies into town. People really love coming to Marquette for the Fall Beer Festival because the setting is so nice and it’s such a great place to visit.”

There are always new breweries and drinks at the U.P. Fall Beer Festival every year, so Graham encourages people to plan to come out next year. The Festival is always growing, and it has become an essential part of Marquette’s brewing culture.

Family fun at carnival in Mqt.