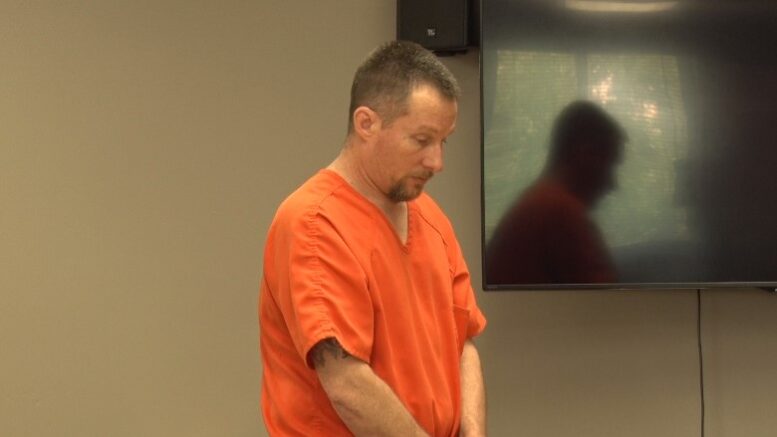 MUNISING — The preliminary exam in the case of the People vs Jason Sadowski continued Friday morning in Alger County District Court, which started on July 9th, and was adjourned after hearing from 8 witnesses. Sadowski was charged with homicide-open murder of his roommate Timothy Mozader, who was found dead in his home on May 30th.

Alger County Prosecuting Attorney Robert Steinhoff called just one witness to the stand, pathologist George Kryzmowski. to discuss the autopsy report. Kryzmowski was questioned by Andrew Griffin, the Chief Assistant Prosecutor for Marquette County who is providing support in the case.

“What was the manner of death, in your opinion?” asked Griffin.

“The manner of death is homicide,” replied Kryzmowski.

“What lead to the conclusion that this was a homicide?” asked Griffin.

The autopsy showed that the hyoid bone in the neck was broken, which Kryzmowski said is difficult to fracture without direct trauma. It also showed that there were several fractures in the face and damage to the neck, which resulted in asphyxiation due to blood filling Mozader’s lungs.

The toxicology report showed there were therapeutic amounts of hydrocodone and amphetamine in Mozader’s system, along with caffeine and an anti-depressant. None of the drugs that showed up on the report were alarming amounts in his system.

During closing arguments, Steinhoff revealed that text messages exchanged between Mozader and Sadowski on the day Mozader was found dead indicated that Mozader was going to evict Sadowski because he was not contributing to the rent payments and did not have a job.

“We believe that we met our burden here of probable cause,” said Steinhoff during his closing argument. “And based on the evidence and argument there is more than enough probable cause to show that this crime was committed in the jurisdiction of Alger County, that Timothy Mozader was killed, and that the defendant is the one that killed him.”

The judge ruled that there was enough probable cause to move forward to trial, and Sadowski was bound over to Circuit Court, where he was immediately arraigned.

If found guilty, Sadowski could face life in prison, with a minimum sentencing of 25 years due to having previous felonies.

Sadowski entered a plea of not guilty, and the pretrial hearing is set for August 21st at 10 a.m.

Marquette organizations paired up to host 4th of July parade