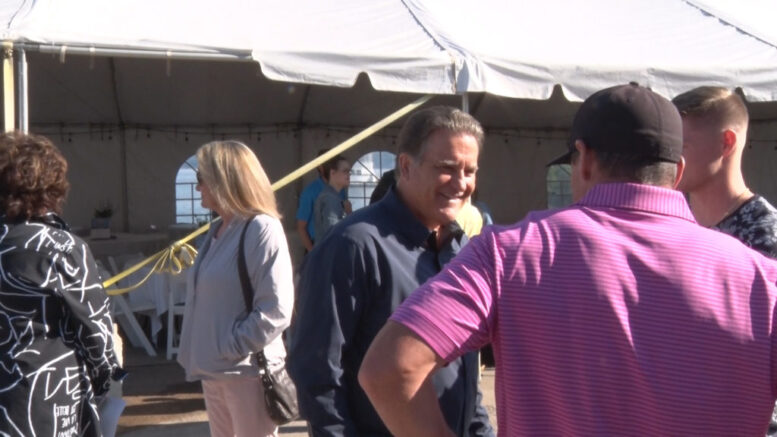 UPDATE — Estimates from the fundraising over the weekend have totaled about $31,000 for both weekend events.

The 6-boat fishing event at Stannard Rock on Saturday yielded roughly $25,000 from over 150 participants, between ticket sales and auctioned items.

Meanwhile, the 18-team golf scramble, held on Sunday, raised about $6,000 from over 50 participants.

MARQUETTE — Ever since the announcement of a new Beacon House in Marquette, the project has received overwhelming support. Earlier tonight, that support became star–studded.

Former NFL Kicker Jay Feely, Deadliest Catch star Captain Keith Colburn and NFL analyst Steve Mariucci all came out to show their support for the Beacon House, which they recognize as an important part of the community.

“I think the Beacon House does so much for the community,” said football analyst and former NFL kicker Jay Feely. “I’ve had family that’s stayed at the Beacon House so I know first-hand how they fill in the gap in the times that are most needed. You have someone who is going through a health struggle, and you don’t know what you’re going to do. You’re going to have the stability of the Beacon House. It’s there for you when you need it most.”

One thing they quickly realized after starting this endeavor? The resiliency and altruism of the region as a whole.

“When you’re talking about the community of Marquette, these aren’t necessarily the people that use the Beacon House,” said Steve Mariucci. “The Beacon House is used by people in all of the other counties. But the people in Marquette, boy do they support it. [They’re] proud of it, [they] understand it’s importance and the need. The people of Marquette have big hearts, they’re very generous.”

“The Beacon House is basically just like it’s called,” added Captain Keith Colburn. “It’s a beacon in the night. It’s for people to stay when their loved ones get in a car crash and they have nothing. It’s amazing. I do a lot of things around the US for different charities, but this one hits here,” he said, as he pointed to his heart.

An auction followed the banquet, where the proceeds went directly to the Beacon House.

An 18–hole scramble will happen this Sunday.

Tickets can be found at upbeaconhouse.org

A big fundraiser for the Beacon House