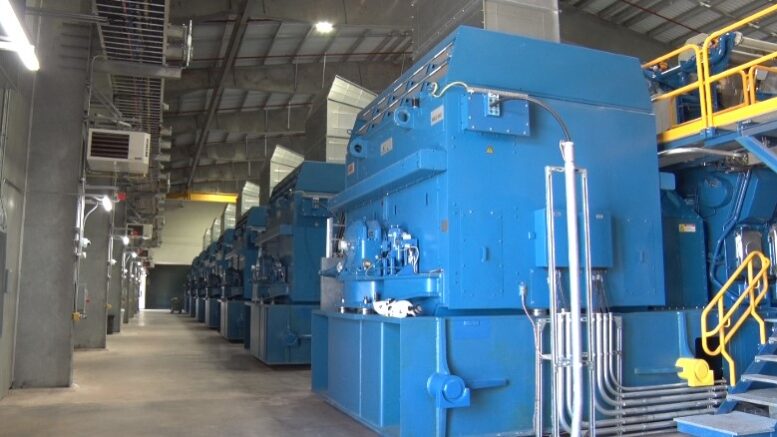 Along with a sister generation station in Baraga Township that contains three of the same engines, the facilities will be producing approximately 180 megawatts of electrical power.

“So we’re putting electricity onto the grid here in the Upper Peninsula, so Michigan customers will benefit from the electric generation that we distribute here,” said Richard Rayborn, director of UMERC. “The facility is a natural gas facility, natural gas prices are very low. So the capital costs for the facility in Negaunee was about $275 million, so on a per–megawatt basis, it’s really economical for the area.”

The facility was officially up and running at full capacity on March 31st, and while it could be operated remotely from Green Bay, there will be a handful of full time employees on the premises every day. This new Generating station is different than the recently closed Presque Isle Power Plant in Marquette in that it will not be relying on dirtier fossil fuels, which fits into the company’s cleaner energy strategy.

“That strategy really has three pieces. One is for us to retire old, fossil fuel plants like the Presque Isle Power Plant,” said Rayborn. “Then use and replace that with state of the art technology that we have used to construct this facility. And then we’re also looking at renewable energy sources, like solar is one that we’re focusing on right now.”

Rayborn said that UMERC is investing in solar energy in a lot of places, and would entertain ideas to bring solar and other renewable energies to the Upper Peninsula.

The generating station was designed to have a 50–decible sound limit, and testing results indicate that the facility operates even quieter than that. The minimal sound coming from the plant combined with it being tucked away off of County Road 492 might mean that some people don’t even know the plant is there, which is also all a part of the company’s plan.

“Usually if they don’t know, that’s a good thing because we really tried to fit into the landscape of the area,” Rayborn said. “This is an industrial area, we did a lot of work to fit in the landscape here. The site is very clean, it’s quite, if you drove by you probably wouldn’t even know that it’s here. But we’re just really focused on providing a clean, reliable, technology and energy source for the Upper Peninsula.”

The new units are expected to save customers nearly $600 million over the next 30 years compared to other alternatives.