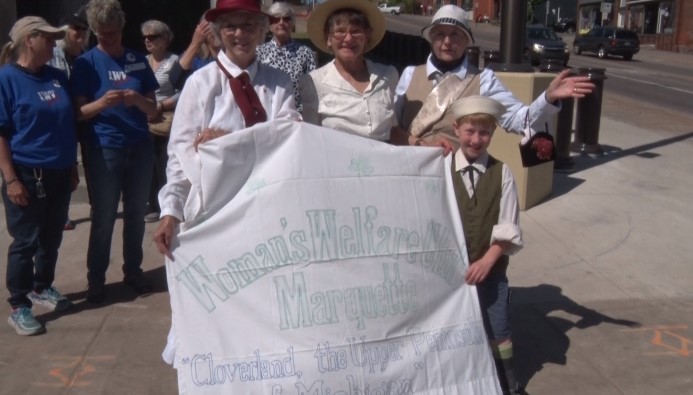 MARQUETTE — Usually when you see a group of people carrying signs by an intersection, you think it’s a protest, but that wasn’t the case Monday afternoon. It was the 100th anniversary of a special moment in Michigan history, and some people were downtown Marquette showing their appreciation for the work that was accomplished.

On June 10th, 1919, Michigan became one of the first states in the country to ratify the 19th Amendment, which would grant women the right to vote. The amendment was ratified unanimously by the state legislature, and a little over a year later it was ratified by 36 states, recognizing women’s suffrage rights.

“Well usually we’re out protesting but I think today is a beautiful day to celebrate,” said Carolyn Hietamaki, who organized the celebration. “We’ve got balloons and that, and we’ll just celebrate because you know what, it has changed women and how they are looked at. I mean, we still have a lot of issues out there, but when you think about it this gives us so many rights to do other things. Not just to vote.”

Wisconsin and Illinois were the first and second states to ratify the 19th amendment, respectively, also 100 years ago on this day.

Obamacare rallies across the state