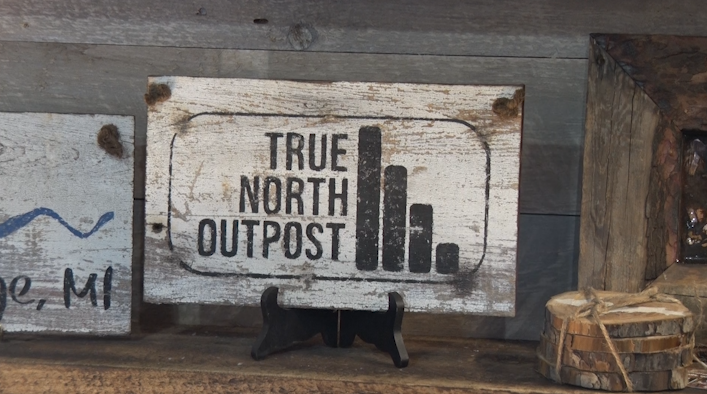 NORWAY — A group of friends have been working for months to turn an old abandoned farm house into a brand new business, and this weekend they held their open house for the public which included live music and food. The True North Outpost will be a one-stop-shop for outdoors enthusiasts in the area, and along with a whole retail space they will be offering white water rafting, a climbing wall, and other outdoors and recreational rentals.

For the owners, they are excited by the response they’ve been getting from the public, and this weekend has shown them their hard work is paying off.

“One of the amazing things about the last two days is seeing everyone come and fellowship here,” said co-owner Nate Alwine. “Last night when Political Lizard was playing, we were able to watch kids run around, bounce on the rafts like they’re trampolines, and people were sitting there and getting food. There’s laughter, and the house is alive, probably for the first time since 1992.”

“It feels really awesome, you know, just a lot of work coming together,” said Austin Kalcec, a co-owner. “It’s going to feel really good to get out of construction mode and into what we intended to do and have fun. And last night, just watching the band on the front porch was just incredible.”

“It is, it’s—I don’t have words. I don’t have words,” said co-owner Evan Blagec. “The way the community has come out and supported us is more than we could’ve asked for. People have been super responsive about the things that we’ve been doing, and at the end of the day we’re just blessed.”

State Senator Ed McBroom and State Representative Beau Lafave also made visits to the Outpost this weekend and were impressed with the upgrades, as well as one family that actually grew up in the farm house.

“By the looks of the house it has changed drastically but there’s a lot of memories that are still here, a lot of things that are original,” said Rick Forstrom, who grew up in the farmhouse. “I imagined this house being gone for good one day. Burned down, torn down. What they have done to this house and the memory is unbelievable.”

The warm response from the locals has the guys focused on finishing up certain projects around the grounds, such as a new pavilion in the yard where the community can gather, and making sure the retail portion is ready to go.

“So the store has been a beautiful learning experience this weekend because what we have in there right now is very much version one,” said Blagec. “We wanted to put it all together, see how it was going to work, see how the community was going to respond to it, and people have been buying a lot of things. People are really interested in what we’re selling. And I’ve gotten a lot of feedback already like ‘hey what about this, I’d love to see this come to the store.’”

“So the building’s project is ending, and that’s a pretty positive thing, it feels really good, and we feel really proud of what we’ve accomplished and really grateful for all of the community,” said Alwine. “But running the business now, that’s a new thing. And once you start it doesn’t stop, so it’s a little scary, but we’re ready.”

“Now it’s time to get our rafting trips scouted out, getting our guides in place, getting all of the equipment, getting the climbing wall open, you know,” said Kalcec. “Just getting to the heart of what we want to do.”

The official opening of the Outpost is scheduled to be Memorial Day weekend, which is also the first weekend when there will be rafting trips down the Menominee River. The True North Outpost is located on the corner of US-8 and Piers Gorge Road just south of the city of Norway. To visit the True North Outpost website, click here.