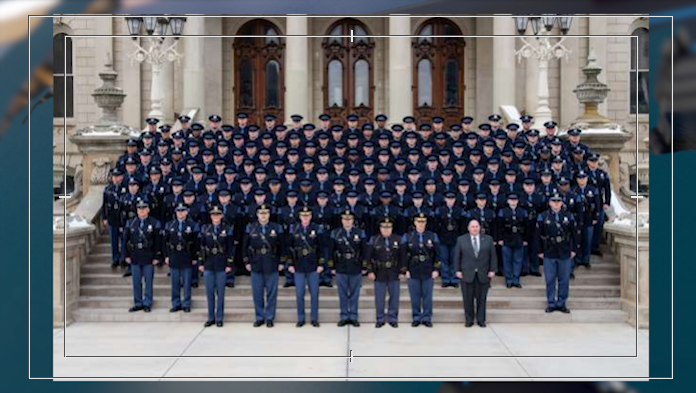 The MSP would like to announce the addition of two new troopers to the Calumet Post. Trooper Freddy Bahena, a native of Shelby, Michigan, and Trooper Braden Knoop, a native of Charlevoix, Michigan.

Three other graduates, Trooper Laken Hammon, Trooper George Kanyuh and Tpr Matthew Yeagley, all will be joining the Negaunee Post.

“I’m proud to recognize the graduates of the 135th Trooper Recruit School who are joining the ranks of the Michigan State Police today,” said Whitmer. “There is no greater calling than service to others and it is my honor to support you as you commit yourselves to a career of public service right here in our great state of Michigan. I wish each of you a long, safe and rewarding career with the Michigan State Police.”

In his address to the graduates, Gasper said, “As you leave here today, I encourage you to seek to be what I call the ‘quiet professional.’ Listen first and show kindness, treating everyone with dignity and respect.”

As part of the department’s commitment to community outreach and service, the recruits organized  a holiday  toy  drive  in  partnership  with  the  Marine  Corps  Reserve “Toys for Tots” and raised  $8,400 for Guardian Angels Medical Service Dogs. The class also helped to prepare a meal for the Commission on Aging’s “Meals on Wheels” program.

The MSP is actively recruiting for future trooper recruit school. There is no singular experience, upbringing or education that makes a trooper.  Each trooper is as diverse as the job they do. View our Facebook album to learn more about some of our newest troopers.

Persons interested in learning more about a career with the MSP should visit www.michigan.gov/mspjobs for information on how to apply. The next trooper recruit school is anticipated to begin in June. Including these new troopers, there are 1,285 troopers assigned statewide.