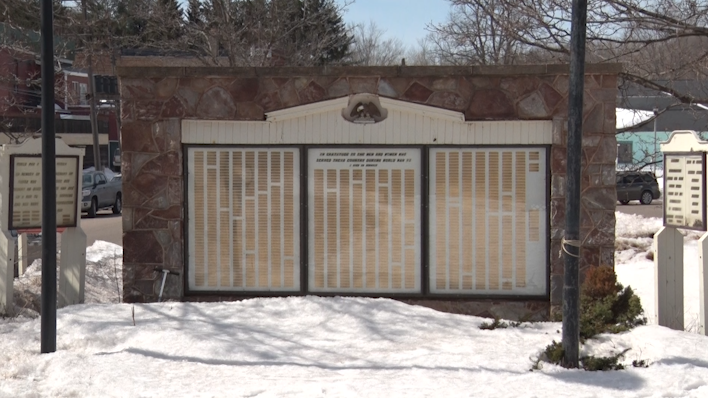 NEGAUNEE — The Negaunee VFW is getting some help from a local boy scout to help restore a monument downtown. The Veterans of Foreign Wars Memorial, located next to city hall, has seen its fair share of winters which have taken a toll on the monument.

Along with repairing and replacing parts of the monument, the project will transform the area around it with new landscaping, and a paved patio for community gatherings.

“When we were looking at doing this, we were just looking at making it look pretty again, you know, fix the bad wood and stuff like that,” said Bernie Stanaway, Commander of the Negaunee VFW. “In my discussion with the Scouts, they decided it would make a great Eagle project. So I sold it to a few scouts who were getting close to their Eagle project, and Nick Mattson took it on and it’s kind of exploded from there.”

The memorial was built in 1949 to honor fallen heroes from World War 2, and additional boards were later added to memorialize those who fought in other wars and conflicts, which are also in need of repairs.

“It’s got quite a few cracks and things with it,” said VFW Officer Tom Stanaway. “It needs an upgrading for being there for such a long time, and the sides for World War 1, Vietnam, and Korea are deteriorated enough that you can’t read some of them. So we do need the project to go ahead right away.”

They are currently trying to secure funds for the project, and are using the website Patronicity.com to accept donations. Patronicity is supported by the Michigan Economic Development Corporation, which will match their funds if the $12,000 goal is reached.

If you’d like to donate to the funds, click here. June 2nd is the last day that donations will be able to be accepted. Or you can mail a donation to: Negaunee VFW, P.O. Box 111, Negaunee MI 49866.

Significance of Memorial Day not lost on Negaunee