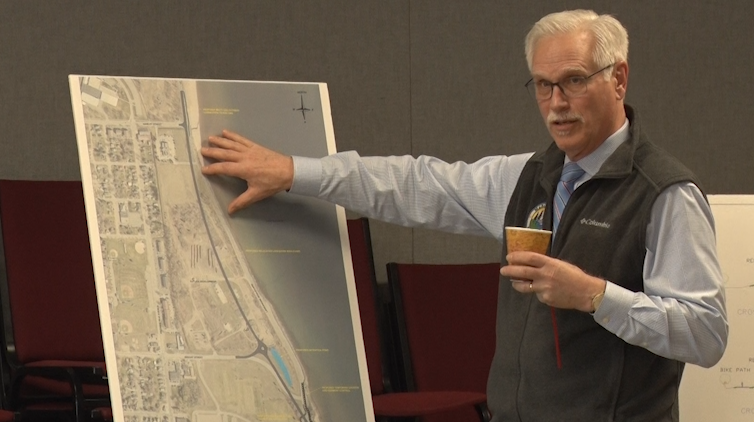 MARQUETTE — The city of Marquette held an informative meeting Wednesday night about the future of Lakeshore Boulevard and the waterfront.

Members of the public gathered at Lakeview Arena to look at some of the plans for the proposed changes to the popular road between Hawley and Wright Street.

The project actually started off back in 2010 when the city commission, with the approval of the public, decided to go forward with planning the relocation of the Lakeshore Boulevard to help with the wear and tear that it receives and the damage done during the winter. The project has been in the works for years, and Wednesday’s meeting was to update the public on its status. The event also served as a chance for citizens to have a chance to discuss or ask questions about the project, and voice any concerns.

The project will be broken down into two phases. Phase one, which will cost just under $4.8 million, could start as early as next summer but there are still some obstacles to overcome. A $2.5 million grant has been awarded to the city which was secured by the Superior Watershed Partnership, and the city still needs to match $3 million worth of funds to get that grant money.

“The first phase will include the road being relocated inland, at its most extreme point being about 300 feet away from the lake,” said city engineer Keith Whittington. “There will be utilities placed there underground for future development. And then there will be some temporary erosion control at the south end just to make sure what we put in that’s new doesn’t get washed away again.”

Phase 2, which would cost roughly $12 million, would transform the land between the road and the lakeshore. The bike path would be moved to the lake side, a beach area would be created, and other areas would have boulders for erosion control to help protect the land and road from Lake Superior during the harsh winter months. As of right now, there are no funds that are secured for Phase 2, but they are exploring options and other grants to help.

“Lake Superior really is a blessing and a curse in these manners,” City Manager Mike Angeli said to the crowd when discussing the damage that Lakeshore Blvd. has seen the last few winters. The road is still closed down due to the damage, and the city is deciding what to do in the process of repairing the current road, but they plan to have it open again this summer.

Mayor Fred Stonehouse wanted to stress to the public that despite any rumors that may circulate about the changes that may occur along that road, the land between Lakeshore Blvd. and the lake will all continue to be public land and for public use. The city commission still has to vote on if it will approve the proposed changes or if it will leave Lakeshore Boulevard how it is.

Christmas is over, but where to dispose of the tree