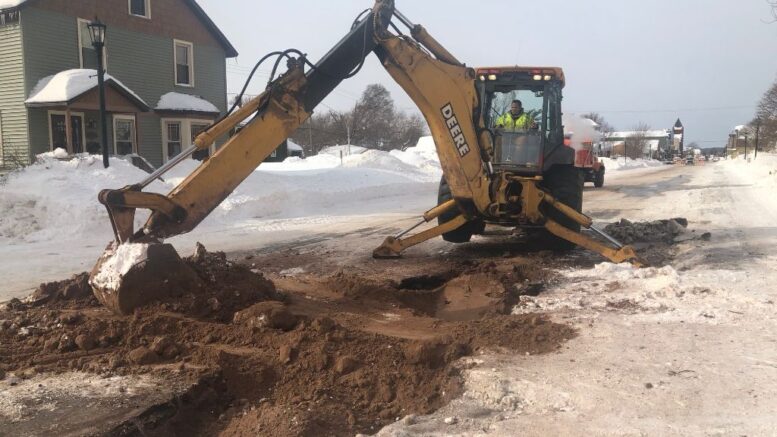 City workers filling in the hole where the main break occurred.

ISHPEMING — The water main break in the City of Ishpeming has been repaired. The break happened on Division Street between 2nd Street and 4th Street, right in front of the high school.

A 12-inch cast iron main was reported to have broken around 2:30 p.m. on Monday afternoon, and the crews worked throughout the night to repair the break. City Manager Mark Slown said the pipe that broke is around 70-80 years old and is going to be fully replaced this spring.

The break caused the water to be turned off in the area, and also caused the school to be closed for the day. But with the repair finally finished, those utilities are fully restored to all customers in the area.

Slown also said he appreciates the amount of exceptionally hard work the city crews have while working throughout the night to isolate the problem quickly despite the harsh conditions. The crews, Slown says, have been working many long days and putting in lots of work, and he and the public appreciate their dedication.

Ladies Night, ‘oh what a night’ for Ishpeming

Ishpeming works on plans for pavilion