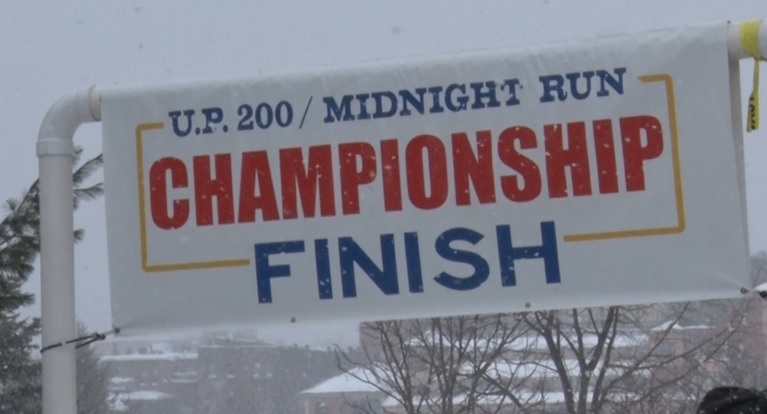 MARQUETTE — The UP200 wrapped up on Sunday with a ceremonial finish at Mattson Lower Harbor Park in Marquette. The race was cut short and actually finished in Wetmore, about 69 miles shorter than usual, because of recent snowfall and ice storms made the trail difficult for the dogs.

The decision was made to end the race early by race officials after discussing the option with the mushers, all of which were fine with the change.

“The ice storm followed by the snow storm made the trees very heavy, and there was trees broken and hanging over the trail” said Darlene Walch, UPSDA President. “So it made it very difficult to groom those trails. On top of that, we had three more storms and the trails were really deep. And that deep snow made it a very slow trail.”

Being slow trails with deep snow, the dogs would be getting tired and would need more breaks to remain healthy throughout the race, which was a factor in the decision to cut the race short. Even so, the community still showed up to cheer the teams on across the ceremonial finish line when the teams chose to hook their teams up, and ride back into town.

“It was a lot of fun, and we very much appreciated all of the people coming out to welcome the mushers back into town,” said Walch. “Especially since they put out the effort to hook their teams up and drive in the last two miles.”

Ryan Anderson won the race with a total time of 21 hours and 26 minutes on the trail, making it his third time winning the race in 5 years. After the race was over, the race veterinarian determined that all of the dogs were healthy and happy.

Monday morning, the UPSDA gave out awards to the mushers and their teams at the Holiday Inn in Marquette. For more information on the race, click here.

UP 200 mushers gather for awards

Meijer announces sponsorship of UP 200

Gone to the dogs: Canine fever takes over the U.P.