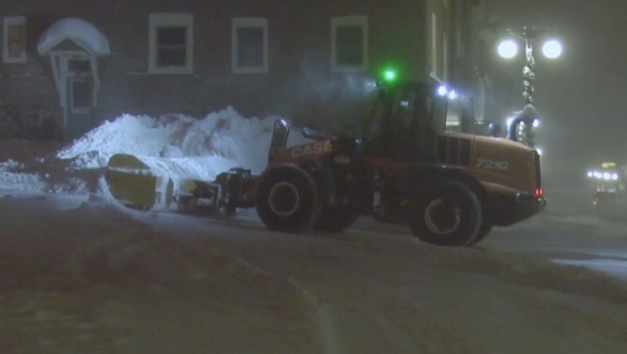 HOUGHTON — Mother Nature has a habit of reminding Keweenaw Residents just how quickly winter conditions can change and when it comes to snow, there are not too many municipalities that can say they are as prepared for the constant repetitive cycle of removing it from it’s streets, as places like the city of Houghton.

“We have just an excellent public works crew, with a lot of experienced people there,” said Houghton City Manager Eric Waara, who compliment’s the city’s snow removal team on a job well done.

When motorist head out on to the road ways after a large snow fall, there’s always a little slipping and sliding along the way, but without a handful of folks at the city’s Department of Public Works, the inner workings of the city would slow down to snail’s pace as residents and business patrons would struggle to find parking, or a traffic lane.

“We do have a few people on day shift doing minor clean up and specialty jobs and things,” Waara said.

During the day light hours, it seems that you can always find a front end loader scooping up snow at the parking decks, but it’s the overnight hours when the orchestrated efforts come to life.

“We do most of our work at night when people are sleeping,” said Waara. “We do get a few complaints about noise at night because, often times it’s noisy, but with thousands of cars moving around during the day, you simply can not get it done during the day.”

It’s not an accident that the crew operates with precision, and with over 218 inches of annual snowfall, operators in the area get plenty of experience, which increases precision and efficiency. And it shows throughout the city, but especially in the downtown commercial district.

“The work that they have to do, especially downtown with mailboxes, and light poles, and side walks, there’s a lot of detail work they have to do to get that done, and they’ve really fine tuned that over the years,” said Waara. “We keep trying new and different things every year to try to do a better job at it. From the comments we’ve gotten this year, what we’re doing is working and folks seem to be happy with it.”

Houghton’s long time snow removal strategy is to truck the loads up to a winter storage lot, where spring temperatures  will have their way with the season’s discarded snow. And Waara says there’s not a better team for the task than the one that serves the people of Houghton.

“From the amount of feedback we’ve been getting from the community, again, I can’t say enough about our public works crew and the job they do.”

Their efforts and expertise are greatly appreciated.

Preventing a Cave-in, One Roof at a Time