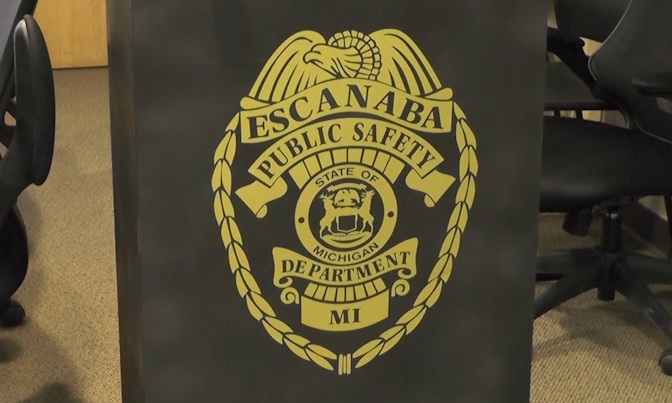 ESCANABA — The city of Escanaba dealt with a severe water main break Thursday morning that caused the city to lose approximately 1 million gallons of water. Friday morning, the city held a press conference regarding the break and the response to the emergency. The break happened near the intersection of 1st Avenue North and 25th Street. Public safety and city workers had to deal with several issues in the process of fixing the problem.

Mayor Marc Tall was the first person to speak at the press conference, which was held at the office of Public Safety. Tall started by thanking the all of workers who worked through the harsh conditions to ensure proper water function throughout the city.

“I’m here to thank the city employees for the outstanding work they did yesterday,” Tall said. “To find the problem, to solve the problem, to clear the piles of ice that were created. And to thank our public safety department for keeping us safe and directing people away from the problem while our crews were doing so much hard work.”

Tall’s comments reflected on the work from more than one department in the city, and the way that each department worked together to get through the problem safely and quickly. But there was a lot of water that was being lost throughout the day, at at first the break could not be located.

“It took us several hours to locate the problem,” said Jeff Lampi, the Water/Wastewater Director for the city. “We lost most of the water in our south water tower. Luckily after several hours we were able to dig through a couple feet of water, DPW made burms to direct the water different directions to allow us access to valves. And we were able to shut that down and do repairs in the afternoon.”

Lampi said that this is a problem that will come up again as water main breaks are something that cities normally have to deal with. However, where the break was located and the weather issues that they dealt with made the problem a bit different than normal. The location of the break was near main highways and roads within the city, which also caused issues when it came to traffic.

“It does take a little bit of time and effort to reroute all of that traffic,” said Director of Public Safety Robert LaMarche. “It was kind of nice for the time of the day. It was early enough before the big rush came in, so they were able to get the detours set up prior to the big rush of traffic.”

Overall, city and county officials were happy with the work that was done by the crew and city employees to find the break and contain the problem, as well as the community when it came to helping those workers. City manager Patrick Jordan has experience working in other cities, but said the amount the workers were able to accomplish on Thursday was unlike other situations that he’s seen.

“These guys are in subzero temperatures and soaking wet trying to fix this pipe,” said Jordan. “I’m amazed at what happened yesterday. The amount of water that was coming out of that tank, the fact that it was fixed by 5 o’clock in the afternoon and the hole was filled in and everyone was on their way home was amazing. Because yesterday morning, that seemed like an impossibility, it was going to be a two day event.”

“Kudos to the city, terrific job,” said Robert Berbohm, the Emergency Coordinator for Delta County. “You think of the weather conditions and what they went through and no injuries. No injuries. That comes from the top down. And kudos to the employees, I can’t imagine. I wouldn’t want to work in those conditions.”

The city of Escanaba also released a list of individuals, organizations, and businesses that it would like to thank for helping with the fix and donating time or services in the process:

To see the reports on the water main break from Thursday, click here.