WASHINGTON D.C. — Tuesday afternoon, Michigan Senator Debbie Stabenow made a speech on the Senate floor regarding the impact that the government shutdown is having before President Trump’s address, and why she wants it to be reopened.

Stabenow, who just won re–election in November, addressed the Senate and emphasized the day–to–day impact on lives of people in Michigan.

Several times throughout the speech she reiterated the need for strong and effective border security, which she says will not be accomplished with the wall President Trump is demanding.

Along with supporting border security, she emphasized the economic security of the people who are most affected by the shutdown.

“Meanwhile in Michigan, hundreds of customs and border patrol officers, who keep us safe every day, are working without pay. And that’s wrong,” said Stabenow on the Senate floor. “The president says we need more security. I support strong border security, as my colleagues do. Strong, effective border security.”

Stabenow, who was an author of the 2018 Farm Bill, also spoke on how the shutdown is hurting farmers in both the state and country.

“Every day that the USDA is shutdown is another day that the improvements that we made, in the 2018 Farm Bill, are delayed,” said Senator Stabenow. 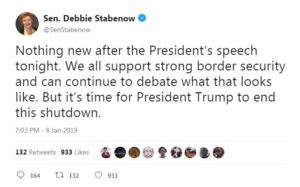 After President Trump made his speech to the nation on Tuesday night, Senator Stabenow released this statement on her twitter page: “Nothing new after the President’s speech tonight. We all support strong border security and can continue to debate what that looks like. But it’s time for President Trump to end this shutdown.” 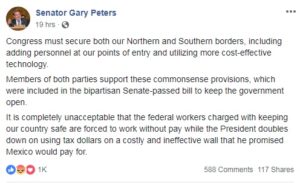 Senator Gary Peters also released a statement on his facebook page following the Presidential address to the nation Tuesday night: “Congress must secure both our Northern and Southern borders, including adding personnel at our points of entry and utilizing more cost–effective technology. Members of both parties support these commonsense provisions, which were included in the bipartisan Senate–passed bill to keep the government open. It is completely unacceptable that the federal workers charged with keeping our country safe are forced to work without pay while the President doubles down on using tax dollars on a costly and ineffective wall that he promised Mexico would pay for.” 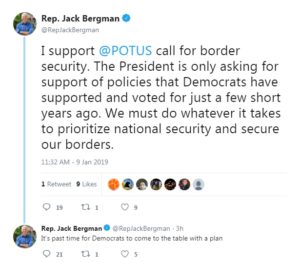 Representative Jack Bergman (MI-1) took to his twitter page Wednesday morning to show his support for the President’s plan on the border, saying: “I support [President Trump’s] call for border security. The President is only asking for support of policies that Democrats have supported and voted for just a few short years ago. We must do whatever it takes to prioritize national security and secure our borders. It’s past time for Democrats to come to the table with a plan.”

To see the full speech that Senator Stabenow made on the Senate floor, click here.