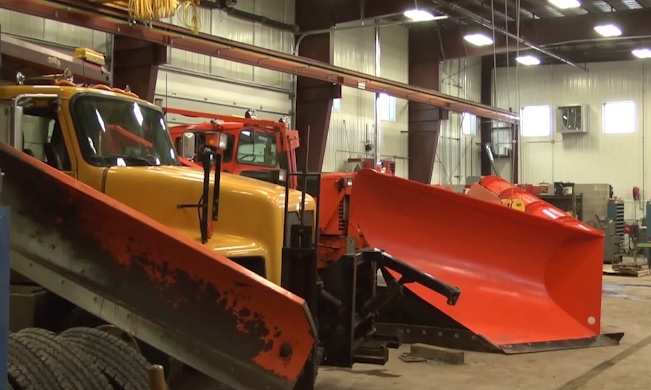 HOUGHTON — A few inches of heavy snow this morning in the Keweenaw Peninsula has had residents slipping and sliding on the roadways for much of the day.

Many motorists find the big orange plow trucks to be an obstruction when driving behind one, but ABC 10 rode along with the road commission today to see just what goes into keeping the roads clear.

A fresh blanket of snow in the UP is welcomed with different reactions from those who drive in it. Some love it and can’t wait to play in it, some want more to sustain a bountiful tourist season, and for Jordan and his coworkers, they want to remove it from Houghton County roads and keep motorist safe.

“When it’s heavy like this our routes are usually delayed a little bit because you can only travel at a slower rate of speed,” said Kevin Harju, the county highway engineer.

Today’s snowfall is a heavy, wet, dense, mixture that would be great for making a snow man, but with a layer of ice already under neath it, one thing it’s not good for is driving. This type of snow is just as hard on the maintenance equipment as it is to drive in.

“The biggest thing is the fatigue on the machine, and the driver because you’re fighting the heavy snow. No one likes to have that heavy snow pushed unposted in their driveway either but unfortunately that’s where a lot of it ends up.”

This truck is what the road commission calls a sander, as it adds traction to the icy surfaces by spreading… you guessed it, sand.

“We’re using quite a bit more right now, because we have a lot of ice,” said Harju. “Typically we jut do hills and corners, but there have been some cases where we’ve had to sand other locations.”

As motorists approach an intersection or even a hill where slippage is likely in icy conditions, they will notice a darkened area on the road, indicating the the sander has been by leaving them with a basic tool for traction. Simply by placing sand on icy or snow covered pavement, the material mixes a grit into the snow or ice, and that is what tires depend on to move a vehicle in these conditions.

“The season was a little delayed this year, and thank goodness because of all the construction that was going on from the flood damage,” said Harju. “Now of course, it started and probably a typical Copper Country Fashion it will snow every day a latte bit, just enough to require our plows to go out.”

Whether it snows a lot or a little, the Houghton County Road Commission maintains over 850 miles of blacktop, which keeps this heavy equipment moving around the clock for snow removal, but once spring comes around again, it’s back to repairing those roads that remain affected from this past summer’s natural disaster.

“We have 30 million dollars worth go damage on the road commission system and we were only able to fix about 15 million of it before the snow set in,” added Harju. “We worked until about Christmas Time. There’s a lot of damage that you don’t see that’s laying underneath that snow that not only drivers should be cautious about, but our drivers have to be also.”

In the mean time, motorists are asked to use general caution when approaching a plow truck.

“Just be patient whit our drivers. There’s a lot of breakdown when we have heavy snow like this, which can slow down the runs.”