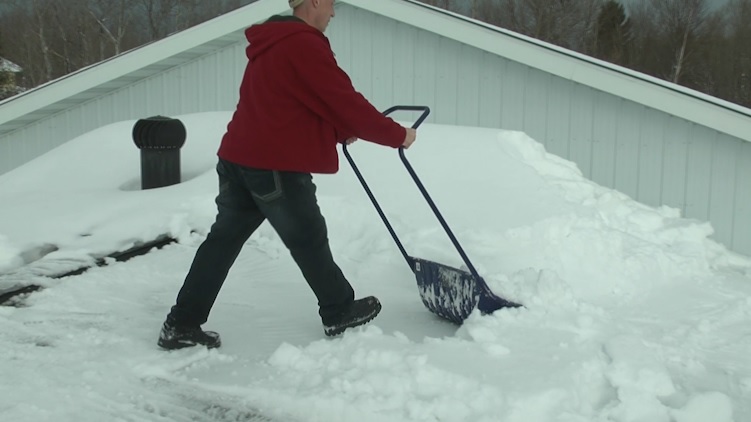 Joe Brusso shovels snow off of a roof in Calumet to help prevent cave-ins.

CALUMET — What seems to be a mild winter season so far in the Keweenaw Peninsula means less shoveling and snow blowing of sidewalks and driveways, but the fluctuation in our recent forecasts gives homeowners and landlords something else to be concerned about.

ABC 10 learned more about maintaining rooftops this time of year and preventing damage to your home, caused by excessive snow accumulation.

Lately, weather patterns in the Keweenaw have presented a few inches of snow here and there, and then a few warmer days where that snow melts somewhat, but because that temperature drops below freezing again at night, that melted water doesn’t necessarily run off.

“We had a lot of rain over the last week which made a lot of weight on the roof there,” said Jeremy Brusso, a snow removal specialist. “And then a bunch of snow came down on top of that so basically were trying to shovel the roofs off and get some of that weight off of they don’t cave in.”

A lot of that run off water gets absorbed by the remaining snow making it heavier, and this causes concern for roof failure.

“The homeowner, would want to get the snow off of the roof so that roof doesn’t cave in on them,” said Brusso. “Or the weight of it cracking the trusses or anything like that.”

Just how much weight is on your roof? This building is about the size of a moderate house and has 8 inches or so of constant depth on it’s roof, the removal crew here says it adds thousands of pounds for the structure to support.

“Snow is kind of heavy. 30 to 40 pounds per scoop load, a couple hundred scoop loads, it adds up pretty fast, before you know it, there’s a lot of weight, you know?”

Oftentimes as weight accumulates on rooftops, the building itself will give tell tale signs, but it’s important to understand what those are, and a better idea to address rooftop snow before hand. The maintenance manager of this building noticed that the building’s doors have been getting harder to open and close. The reason for that, is all of the snow on the roof causes the load bearing walls to be stressed, putting pressure on vulnerable points like doorways and windows.

“The conditions out there whether it’s a wet heavy snow or just depending on what the type of weather was for it would make it whether it has to be done sooner or later,” added Brusso.

This crew stays pretty busy this time of year, moving from one roof top to the next.

“We like to do a couple of jobs a day if we can, anyway. We’re happy to be out here in the UP, shoveling snow.”