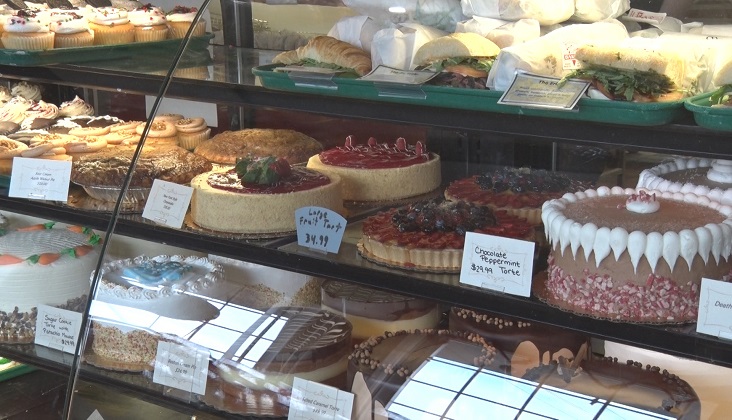 MARQUETTE COUNTY — Two U.P. bakers have earned themselves a spot on the Food Network.

Joe Heck known as the “Cake Guy” at Huron Mountain Bakery and Owner of Midtown Bakery in Negaunee, Marybeth Kurtz; competed against 4 other teams on Food Networks newest show called “Winner Cake All”

It all started back in April when Joe got a phone call from a California area code.

“I was working here at the bakery and got a phone call and it was a producer for a show, for Food Network. They had seen an article that was written about me and asked if I wanted to be on a Food Network Show. I was a little taken aback and then I thought, yeah sure,” said Joe Heck, “Cake Guy” at Huron Mountain Bakery.

“In the spring Joe Heck called me and said hey I got this opportunity to do a TV show out in California and I need a partner, would you be interested? I was like what…okay,” said Marybeth Kurtz, Owner of Midtown Bakery.

Even though Joe and Marybeth are both considered competitors they are also friends.

“People consider us as competitors, but really in a small town everybody works together. Even if you are in the same business and I think this was a great opportunity to showcase what small towns and what small town people are all about,” Kurtz added.

“Two people that own competing bakeries can actually get together and have a good time and have fun. It doesn’t have to be this cut throat, mean industry,” Heck added.

Coming from a small town Joe and Marybeth are excited to show they can compete with the big cities too.

“We are just as talented as the people that came from the big cities and also that you can make people happy with that you do. Just seeing how excited people get knowing that you are going to be a part of a television show that people watch, that has to do with what you do for a living. It makes you a little more excited to come to work in the morning,” said Heck.

The two bakers who have been baking most of their lives describe this as a once in a lifetime opportunity, that most bakers dream about.

“We went with the whole mindset that this was going to be an adventure, that it was going to be an experience that you can’t buy. Most people never even dream about it, it was just something that we got to do that was a lot of fun. Coming from the Upper Peninsula we hope that we represent and make people proud of our small town,” said Kurtz.