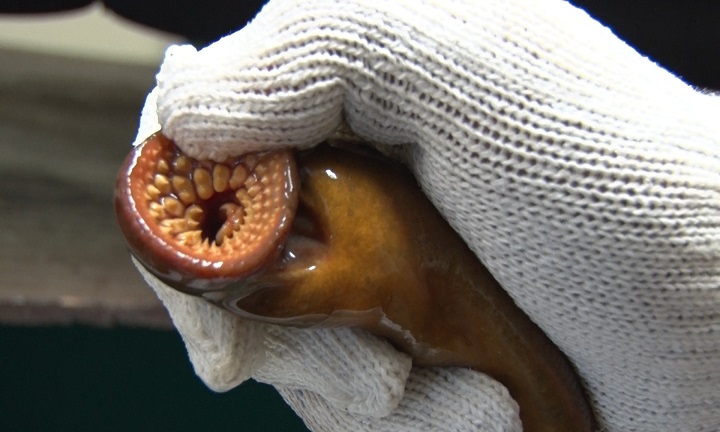 MARQUETTE COUNTY — In the early 1900’s the Great Lakes were under attack by an invasive species known as Sea Lamprey. ABC 10’s Dan Callahan got a chance to take a look at the species up close.

Sea Lamprey originally came from the oceans and is known to act as a parasite towards fish once fully grown. Like most invasive species that find their way into the Great Lakes, they tend to do more bad then good for the ecosystem.

This created an issue for the commercial fishing due to the Sea Lamprey killing off large amounts of fish which forced the creation of a new commission.

“Sea Lamprey has been around in the Great Lakes since the early 1900s,” said U.S. Fish and Wildlife Fish Biologist, Robert Frank. “The Great Lakes Fisheries Commission was formed in 1950s and since that time we have been treating Sea Lamprey.”

Treating the Lamprey during its younger stages is the most effective way in keeping the invasive species in check due to them not going out into deeper waters while growing. This gives Biologists in the Fish and Wildlife service’s a better chance to remove the invasive lamprey before undergoing its next step in growing.

“So Lamprey in the first three of the 4 years of their life cycle they are filter feeders,” said Robert. “They are burrowed into the sediment of the streams and they are just passive filter feeding. Once they start to become 100 millimeters in length they start to go through a transformation phase.”

This transformative phase within Lamprey consists of the growing of a mouth which has a jaw filled with teeth. They then use these new tools to go hunting for fish out in the Great Lakes.

“They swim out to the Great Lakes then and attach to any fish,” explained Robert. “They are non-discriminatory and over the course of approximately 18 months they will kill 40 pounds of fish.”

This amount could increase if they the invasive species is not kept in check and removed when possible. This could not only cause the commercial fishing to suffer, but also have a large effect on the ecosystem as a whole.

For more information about Sea Lamprey you can click here.