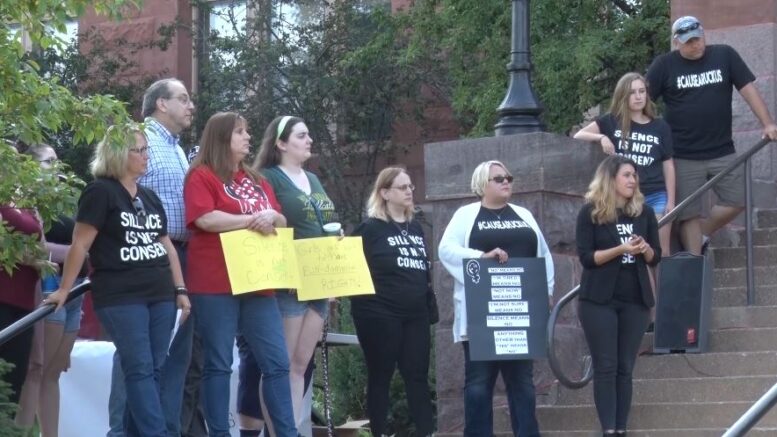 MARQUETTE — Supporters and activist gathered on the steps of The Marquette County Court House Thursday evening to show their support for survivors of sexual assault put on by We Are The Marquette Movement.

This movement that has been ongoing, all started when someone mentioned “silence is not consent” in a sexual assault defense case. Organizers want to help be the voice for the survivors.

“I think a lot of survivors of sexual assault feel very isolated and very alone,” said Hannah Syrjala, Co-Founder of Marquette Movement. “Maybe that it’s a little bit their fault, because they didn’t fight back hard enough and they should’ve said something sooner. When a lot of people feel that way its very very important to pull them together and let them know that they aren’t alone. That we stand with them, and when they cant speak we will speak for them.”

According prosecutors office there are currently about 20 open sexual assault cases. With the amount of cases Prosecutor Matt Wesis sees. A new wave of awareness needs to happen. Survivors who are hesitant to come forward about their experiences will find support in those who are willing listen and be present in the fight against sexual assault.

“Sexual assault is real, sexual assault happens,” said Prosecutor, Matt Wiese. “We all know women and its primarily a crime against women. Although men and children can be victims or survivors too. Its important that people acknowledge that this is not a myth, this not something that’s made up. Its real.”

For those who are interested in getting their hands on a T-shirt featuring their message, they are available for purchase at the Women’s Center located in Marquette. All proceeds for the T-Shirts go to support the Women’s Shelter.