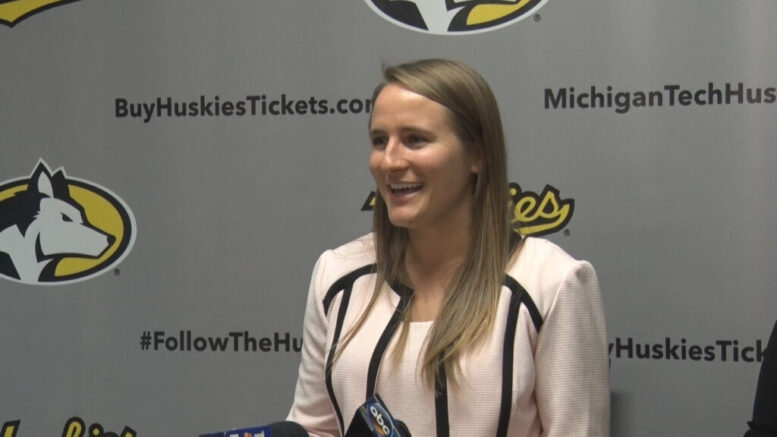 HOUGHTON — It’s a sort of passing of a torch. When Michigan Tech women’s basketball coach Kim Cameron took a job with bowling green, a large and very important vacancy loomed. But now, it seems the huskies have found their fit on the sidelines.

Sam Hoyt was introduced as Michigan Tech’s new head women’s basketball coach this afternoon. After spending a few years coaching at the Division I and II levels, the former Husky standout made her return to campus.

For Hoyt, the excitement is overwhelming.

“This is home to me,” she said, “and I got the same feeling when I stepped on campus ten years ago.”

Losing six seniors and a head coach, the Huskies seem like they have their work cut out for them. This isn’t uncharted territory for Hoyt, who was in a similar situation as a player for the Huskies.

“It was a whole new team, new head coach, and that was the year we made it to the National Championship. So I’m coming in with the exact same mentality.”

Former coach Kim Cameron joined the team when Hoyt was playing. Much of Hoyt’s coaching experience comes from their connection.

“It’s Michigan Tech Basketball,” said Hoyt. “It’s the work ethic. She taught me so much about just the time it takes to put in the leadership skills. She really pushed me to become a better leader, and I am so, so grateful to her for that.”

Being a team captain, as well as first team all conference during her time at Tech, Hoyt knows what it takes to lead a team.

“First and foremost is just being a role model, showing them how to lead; taking ownership for the things that I say, the things that I do. Modeling those characteristics that I want to instill. The integrity, the work ethic,” said Hoyt.

Hoyt plans to fill her coaching staff within the next couple of weeks. For her, and her athletes, it’s a whole new beginning.