The Houghton Police Department reports that, with help from the public, they have located and identified the driver of the truck involved in the hit and run property damage accident.

The investigation is ongoing. Charges will be sought through 97th District Court.

HOUGHTON — The Houghton Police Department is investigating a hit and run accident, and has released more information regarding the suspect vehicle.

The accident occurred on Tuesday May 22nd around 2:30 p.m. on Sharon Avenue in Houghton. The suspect vehicle rear-ended a gold sedan as it was turning into the Sharon Center, then left the scene.

The driver of the gold sedan sustained an injury, and sought their own medical treatment.

With information received from the public, the Houghton Police Department believes that the suspect vehicle is a green or blue truck, possibly a Dodge Dakota, with a red topper. The vehicle was last seen headed south on Montezuma Avenue in Houghton at 2:30 p.m. on the day of the accident.

The driver of the vehicle is described as an older, white male with a shaved head, or possibly bald. There were also two dogs reportedly in the vehicle, and they are believed to be Golden Retrievers.

The truck will likely have front end damage. It may have a possible plate number ending with 964. The vehicle is pictured below. 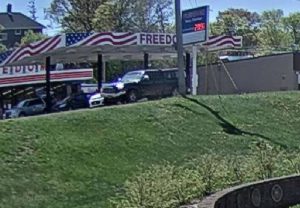 You can also view the picture HERE. Anyone with more information is asked to call the Houghton Police Department.