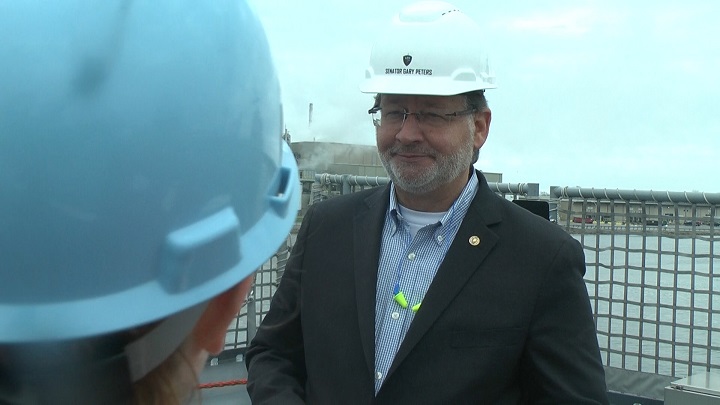 Peters, along with staff from the Marinette Marine, Lockheed Martin and high school students from Menominee and Stephenson, took a tour of the facility and learned the production of a vessel from the moment the steel arrives at the facility to the completed ship.

Marinette Marine is one of two sites in the nation that construct these types of ships, and it’s the only naval shipyard in the Midwest. Peters said that it’s important to keep ship-building technology in the U.S. and keep the talented people building these ships working.

“We’ve got to have the men and women who know how to build these incredible war ships continuing to work. There needs to be constant flow. You can’t shut down a ship yard and start it up again two or three years later,” said Peters. “There’s no question — when it comes to building a world-class product, folks here and in northern Michigan and northern Wisconsin know how to build a world-class product.”

As a member of the Senate Armed Services Committee, Senator Peters Peters will be examining naval policy and strategy in the years ahead. He said that these Littoral Combat Ships are flexible and are important in keeping up with the changing warfare.