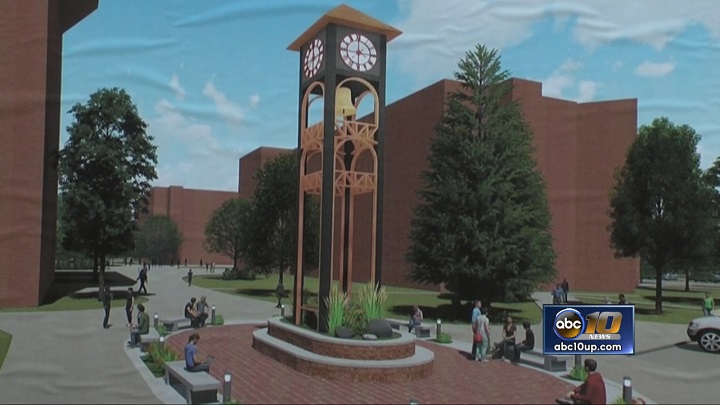 HOUGHTON — Many gathered on the campus of Michigan Tech today for the ground breaking ceremony of the university’s newest addition to an ongoing beautification project.

The new centerpiece will be a large clock tower made possible by a donation from MTU Alumnus William Bernard and his wife, Ilene, and their family.

“It’s a work in progress to beautify the Michigan Tech campus. We’ve added a plaza near our library, We’ve added the husky dog statue in the middle of campus that’s been a real gathering point, and today the Bernard family, Bill and Ilene have helped us with a clock tower on campus,” said Glen Mroz, current president MTU.

Bernard was born and raised in Houghton and received his bachelor degree from Tech in 1969 before moving his way up the ladder of success.

“He was a hockey player when he was a kid here and graduated in the metallurgical department. He got a job in that field and worked his way up through thast company to the point where he is the owner and CEO of the company today,” Mroz stated.

He is now the president of Surface Combustion Inc., a company that produces high temperature equipment that is used for testing an item’s thermal properties. Bernard’s machines were used to analyze pieces of the World Trade Center’s Twin Towers after the infamous attacks of 2001. This data was used to locate failure points of the towers and assisted in the search for more advanced construction material for future development.

Along with his donation that will be applied to the materials and construction of the clock tower, Bernard has also donated a scholarship fund.

Construction of the tower is expected to begin right away, and could be completed before the start of the next school year.

“We’re going to have a bell on this clock tower so, whenever anything special happens, we’re going to be able to ring the bell,” he said.