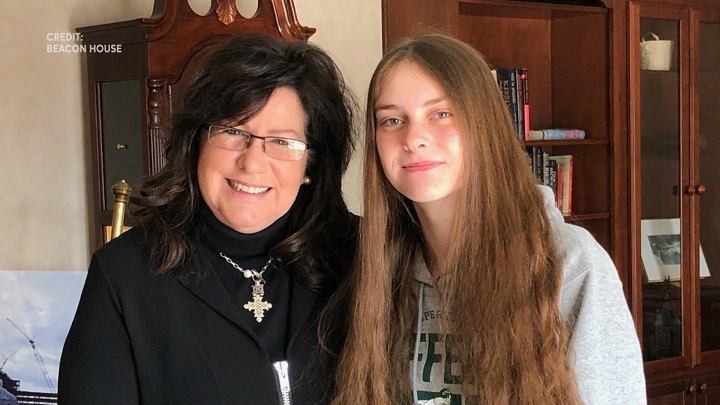 Mary Dowling, CEO of Hospitality House of the Upper Peninsula, with LeeAnn Mantta.

PAINESDALE/MARQUETTE — A Keweenaw teen is paying it forward and showing her appreciation for an Upper Peninsula charity as she has enlisted the help of area businesses and raised several thousand dollars.

Beacon House is a non-profit hospitality house that gives medical patients and their families a place to stay if traveling to Marquette for medical reasons and have come from far away. LeeAnn Mantta is a Jeffers High School Junior who’s father is a patient and makes that 100 mile trip.

“He had to have radiation and they just let him stay there and my mom stayed there and it was really nice because they made it really easy for my family,” she said.

Mantta is a member of the National Honor Society and understands that places like the Beacon House depend on kindness and generosity, in order to continue to give it and she has recently made it the focus of her community service project.

“A service project is kind of just to give back to the community. So, I just chose the Beacon House because they helped out my family a lot,” said Mantta.

She has gone above and beyond and reached out to a number of Keweenaw businesses and churches who have donated to the cause.

“She has raised almost $4,000 in cash donations,” said Mary Dowling, CEO of the Hospitality House of the Upper Peninsula. “She’s gone to all these different businesses and individuals to seek these donations on our behalf and it’s just incredible.”

In addition to cash donations, she has also gathered another $400 in bathroom, office and cleaning supplies that Dowling says will all be used.

“I guess when I think about the future, when I think about people like LeeAnn who is just 17 years old and she has a philanthropic heart, for her to have the presence of mind to say, ‘I’m going to take this situation and I’m going to do something really amazing with it, I’m going to help other people with my problem,’ and when she’s showing us how to do it, not waiting for someone else to do it. She’s just saying ‘I see a need, and I’m going to go fill it.’ I think that’s one of the most remarkable things. It gives me just an amazing feeling about the future that when there’s people like LeeAnn in it, we’re in good hands,” said Dowling.

“I think that people should pay it forward to others because not a lot of people have what you have and I think it’s just a nice thing to do,” added Mantta.

After graduation, she plans to join the Air Force, and eventually enter the field of neurology.