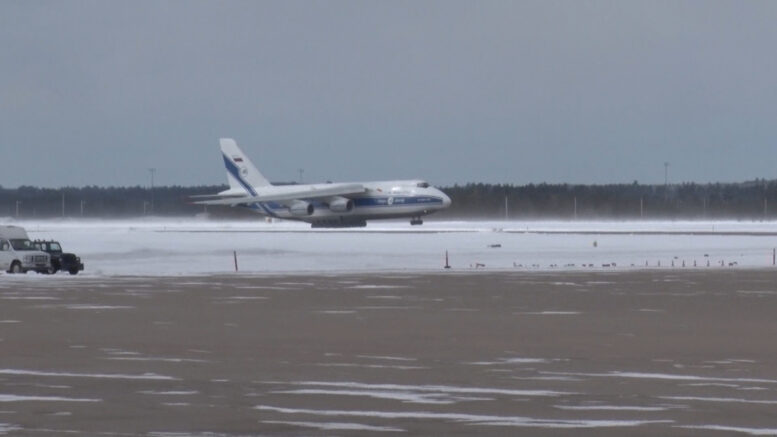 After a slight delay, Spectators at K.I. Sawyer International Airport were pleased when a giant aircraft landed on the runway. The Antonov–124 arrived safely after having to circle the runway for nearly an hour. Its mission was to store a helicopter and bring it back to its homeland, in South Korea. Due to the size of the plane, a large runway was needed.

The fourth largest plane in the world, measuring 226 feet from nose to tail, can hold over 330,000 pounds of cargo, but, even in the high winds, landed as softly as a butterfly.

“It’s interesting how large that aircraft is and it came in so smooth,” said Whipple. “You just wouldn’t expect something that big to be able to fly; it’s a huge, mammoth craft it really is.”

Due to security reasons, access into the plane was prohibited, but spectators were thrilled nonetheless. One of only 55 made, the large aircraft was a spectacle to behold for yoopers and out–of–towners alike.

The plane will be leaving at 12:30 on Thursday morning. It’s short stay won’t soon be forgotten.