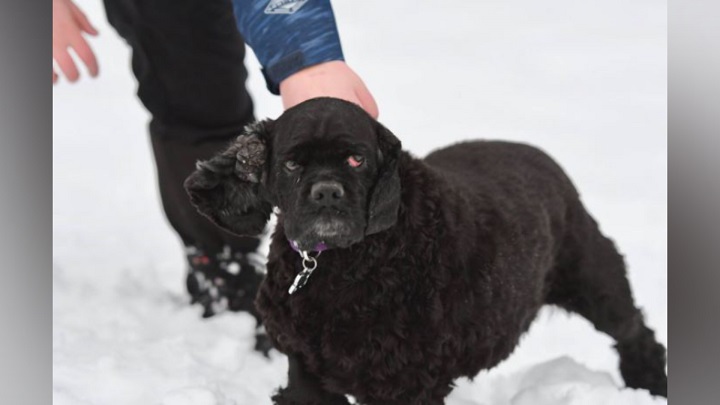 ISHPEMING — We sometimes hear stories about neglected or abused animals receiving a second chance at life, and this is exactly what happened to a black Cocker Spaniel named Nubs. Now, Nubs’s family is looking to give back to the shelter that helped save her life.

Although she now follows her owner, Susan Hill, around her family home in Ishpeming, back in November, happiness didn’t seem possible for this pup. Nubs was surrendered as a stray to the Upper Peninsula Animal Welfare Shelter in November 2017.

She was brought to Diva Dogs Grooming in Negaunee, and the owner called Hill, a photographer, to take pictures as proof of her condition in case the owner came forward to claim the animal.

“She was completely matted, ears are infected to the point where she is now deaf. Her eyes were green and oozing and the smell. There are no words to describe the smell that was coming off of this poor, matted, little dog. You couldn’t even tell what kind of dog she was,” said Hill.

The conclusion was that the dog had been horribly neglected, but as her nails were trimmed and her fur was shampooed, the dog began to perk up.

“I started bawling at that point, because I was completely in love with this stinky, little, crippled, sad, sickly oh,” said Hill. “Just, how could someone do that to a dog?”

Hill said she couldn’t stop thinking of the dog, so she contacted UPAWS to see if her family could foster the dog. UPAWS named her Marsha. Hill’s family renamed the pup “Nubs,” because her little nubby tail never stops wagging.

Nubs and Hill then started the road to recovery, with short walks down the driveway. By December, Nubs was healthy enough to have an ear surgery in Appleton, because local veterinarians were not comfortable operating Nubs’s ear condition.

“It’s a pretty steep recovery, but she handled it like a rock star,” said Hill.

Because she was still a foster pet at this point, UPAWS footed the $3,500 bill for the surgery. Just two weeks later, Nubs became a permanent member of Hill’s family.

Hill said “We were able to adopt her on January the 4th from UPAWS, so that takes the financial strain off of them. I’m afraid these ears are very, very expensive to get fixed.”

The family created a GoFundMe page in Nubs’s honor for a few purposes: to raise awareness for her story, to help cover the costs of surgery on her second ear and to pay UPAWS back for the first ear surgery.

“They were fully prepared to fundraise to be able to handle the second ear,” said Hill. “They have so much going on out there, those people are amazing. What they did for Nubs, there are no words. I would love to surpass our goal and be able to pay UPAWS back the $3,500 that they put into her, as well.”

Nubs will undergo her second ear canal ablation this Wednesday. Hopefully, veterinarians will be able to fix her cherry eye as well, to avoid putting Nubs under another time.

Her family is expecting Nubs to make a complete recovery, just like she did with the first ear surgery, but, one question remains: what is Nubs’s story?

Even if they never figure out her story, Nubs will always be a treasured member of their family.

Pet of the Week from UPAWS