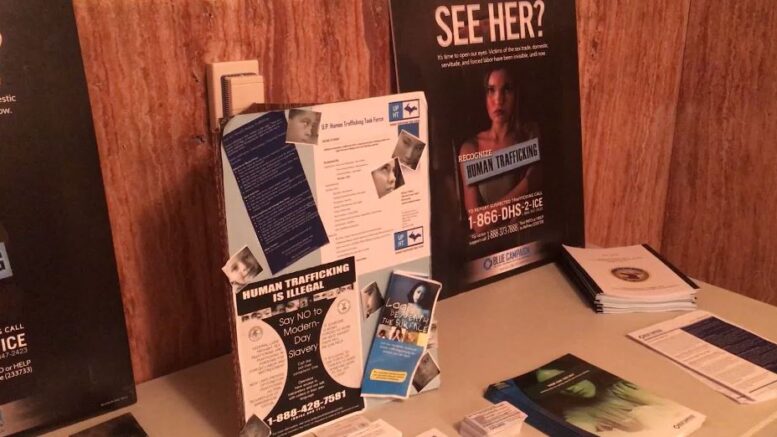 HANCOCK — When you hear the term human trafficking, chances are you think of illegal aliens who were smuggled into the country. However, Homeland Security Agent Todd Wilton explained the difference between human smuggling and trafficking and says that’s one of the misconceptions that the team hopes to clarify through this series of presentations. Michigan State Trooper Alan Narhi was a speaker last night at the Jutila Center.

“So we’re here bringing awareness to human trafficking and letting people know what’s out there and what to look for,” said Narhi.

The team began visiting UP colleges on Monday and will hold one more discussion Friday in Marquette.

Hurley says that body language is often times an indicating sign and the public should be on the lookout for things that seem out of place.

“Children or women that are in positions that really don’t seem like they should be in. For instance, a young girl that looks really uncomfortable with an older man walking into a hotel.”

“Through presentations like this, you’ll see that there is a lot of support out there for that so when they do get recognized or identified, there are services for them that can help in keeping them safe and getting them back on their feet because these people have been through a lot,” added Narhi.

Friday’s discussion will be held at 1:00 pm at the NMU University Center’s Nicolet Room.