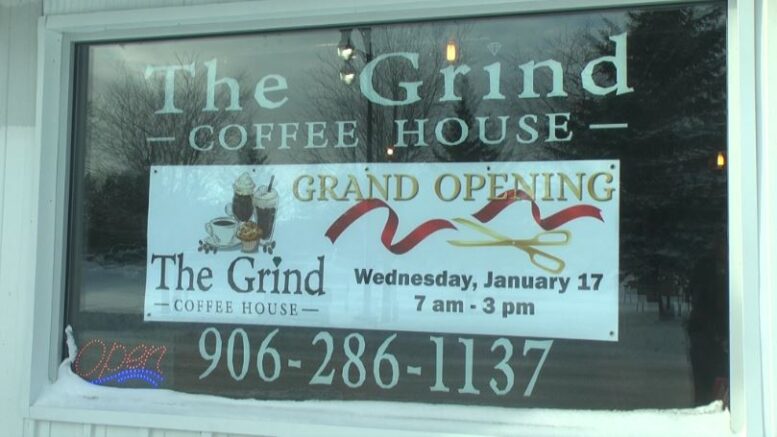 MANISTIQUE — When ABC 10 last visited The Grind Coffee House in March, the building was just about halfway done. Manistique High School students in business, building trades and computer-aided design (CAD) classes were working together to start their own coffee shop.

Less than a year later, The Grind is getting ready for their grand opening celebration.

“It’s pretty awesome. It was a really cool idea at the beginning, but no one thought it was really going to happen. To see it actually come alive is really cool,” said Joslyn Muth, a student barista.

“I just think it’s crazy how much work it really took to get going,” said Renae Schuetter, another student barista. “At the beginning of the year, we had nothing done and now we’re already having our grand opening.”

The grand opening celebration begins January 17th at 7:00 a.m., which is one hour earlier than normal business hours. From now on, the shop will open at 7:00 a.m. every day, including weekends.

The Grind will debut loyalty cards, feature baked goods from Huron Mountain Bakery and the first ten customers will receive a gift bag. During the second half of the day, customers can enjoy deals on drinks until the students close up shop at 3:00 p.m. For more details on the grand opening specials, visit The Grind’s Facebook page.

Since The Grind is non-profit, all of the proceeds from the shop will go directly back into the school.

“After operating costs, all of the funds are going to go back into the school,” said Alycia Kaiser, the student education coordinator at Limestone Federal Credit Union. “It’s probably going to work like how a grant would – you apply for it, the students look through the applications and we decide where they would like those funds to go. I think that will be a really rewarding aspect to the project, to give back to their school and to people in the community.”

Manistique’s newest coffee shop is located across the street from Manistique Middle and High School, and has the community buzzing from more than just the caffeine.

If you’ve never been inside The Grind, the wooden sponsor wall is a piece of decor to take note of. The wall proudly displays all of the coffee house’s supporters.

“We’ve had so much help in the community, we really wanted to kind of pay homage to those people who have helped us to this point because without them, none of this would have been possible,” said Kaiser.

About one-third of the sponsors still have to be placed on the wall, but that’s just one more thing that The Grind is planning on doing in the future. In addition to being open for another hour each day and open on weekends, The Grind is looking to collaborate with the CAD classes to develop an app to let customers order their drinks from their phones.

To view the previous story on The Grind Coffee House, click HERE.

Local bakery in the running for Michigan’s Best Doughnut

Fat Tuesday is the busiest for Huron Mountain Bakery