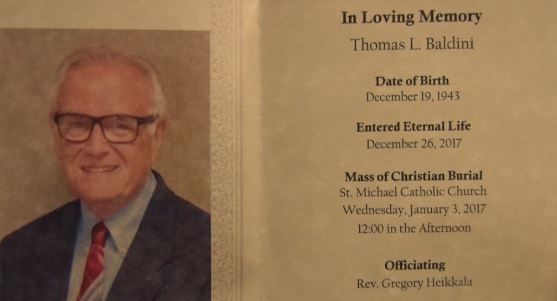 MARQUETTE — Tuesday night, the Marquette community gathered to honor and remember late mayor, Tom Baldini, as a hardworking individual who cared deeply about the UP.

Canale-Tonella Funeral Home was host to an open visitation to the public, as friends, family, city officials, and politicians, such as former Michigan Democratic Congressman Bart Stupak, gathered to reminisce on the difficult loss. Baldini passed away on December 26th after complications from a stroke.

Lieutenant Governor Brian Calley is also in town to pay his respects to Tom Baldini, his family and the community. Calley said Baldini had an extraordinary life of public service and that he is confident that Marquette can carry on his legacy.

“What a huge hole that his passing leaves for the community,” said the Lt. Governor. “It’s a strong community, and it’s stronger because of him. I look forward to the future knowing that there are so many people that his life of service touched.”

Donations were also accepted in Baldini’s name to donate to the Marquette Area Public Schools Education Foundation. Baldini’s funeral mass will be held on Wednesday afternoon at St. Michael’s Catholic Church at noon.