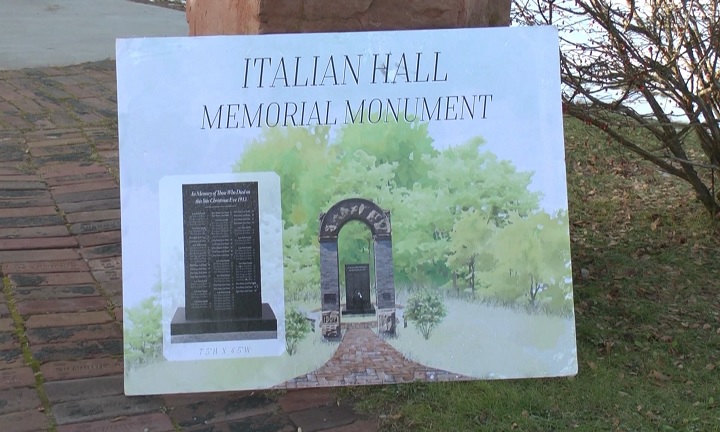 CALUMET — The installation of a public monument honoring those lost in the Italian Hall Tragedy has been postponed until spring. The delay is a result of a defect that was recently found after the stone arrived from overseas.

The year was 1913. It was Christmas Eve and hundreds gathered for a union Christmas party in Calumet. Miners were five months on strike hoping to achieve safer working conditions and their families were feeling the financial strain from five months with out income. As you can imagine, Christmas presents were going to be scarce and for that reason, the party was organized, ensuring that no child went without a gift.

It’s unclear how many people attended that night, 300 were expected to, but reports estimate that attendance was much higher. As the children approached the stage to receive their gifts, someone in the crowd yelled out the word “fire!”

Panic quickly spread among the crowd and everyone in the place rushed to the stair case hoping to make it downstairs and onto the street safe from the flames, but the truth is, there were no flames. There was no fire. The man who yelled that false alarm caused a panic that cost the lives of 73 people that night most of them were children under the age of ten.

We still remember that here in the Keweenaw. In fact we refuse to forget it. The lot where the Italian Hall once stood is now a preserved site of the Keweenaw National Historical Park.

A few plaques have been added over the years in remembrance of those who perished. But until now, nothing displaying the names of all who were lost on that dreadful night. So a committee was assembled, money was raised, and an official monument has been purchased proudly honoring the victims.

Installation of the monument began a few months ago when a base was poured, but the imported granite stone to bear the names was recently found to have some discoloration. So it was rejected.

“The rock had some brown in it. It wasn’t the black, and it couldn’t be shined up to be the black. Champion Monument said ‘Well, this is going to be around hopefully for a long long time, and we wanna have it done right to start with so they didn’t accept it,'” said Mike Lahti, a member of the Italian Hall Memorial Committee.

A new stone has been ordered, which will be mined in India, then transported to Minneapolis where the victims names will be etched. From there the four-ton granite rock will be brought to Calumet and installed in the park.

“It means a lot to the ones who lost family members here and have lived with that in their history,” said Lahti.

The new stone is expected to be shipped in January, and in place at the park by May of next year.