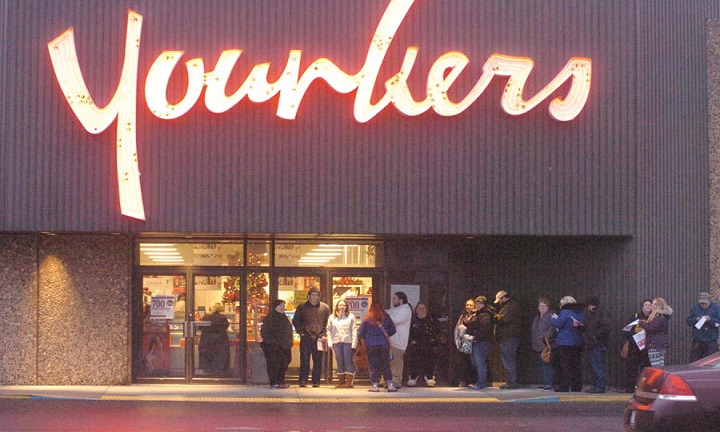 Younkers on Black Friday, 2016. Photo Courtesy of the Mining Journal by Ray Bressette.

The parent company of Younkers, Bon-Ton Stores, Inc., has officially announced that the location in the Westwood Mall will close on January 31st, 2018, according to a statement released by the company. The closure will affect the 68 associates employed at this location.

The entire statement reads as follows:

The Bon-Ton Stores, Inc. (OTCQX: BONT), today announced it will close its Younkers at the Westwood Mall in Marquette, Michigan early next year when its lease expires January 31, 2018. The store will be open for business to customers through the end of January.  The closing will impact approximately 68 associates currently working at this location.

“We would like to thank the loyal customers who have shopped with Younkers over the years as well as our devoted store associates for their dedication and friendly customer service to this community.  commented Bill Tracy, president and chief executive officer for The Bon-Ton Stores, Inc.”

In January, associates at this location will be offered the opportunity to interview for available positions at other store locations or receive career transition benefits, including severance, according to established practices and state employment service support.

Customers are invited to visit the company’s website at younkers.com to continue to access promotions and shop an expanded merchandise assortment.

MARQUETTE TOWNSHIP — Younkers in the Westwood Mall will reportedly shut its doors in 2018, according to several sources.

Bon-Ton Stores, Inc., the parent company of Younkers, announced earlier this month that it would close at least 40 company stores, which is a sixth of the company’s 260 department stores, furniture galleries and clearance centers in the U.S.

In an interview with InvestorPlace.com, CFO of Bon-Ton Nancy Walsh said that the company will focus on closing down “negative cash flow stores” that have already been on its radar and that the chain is looking to close some of its smaller locations.

ABC 10 has reached out to a representative of Bon-Ton Stores, Inc., but they have yet to return our call for confirmation. Stay with ABC 10 for updates.

Sayklly’s leaving Westwood Mall at end of the month

Westwood Mall properties have been purchased