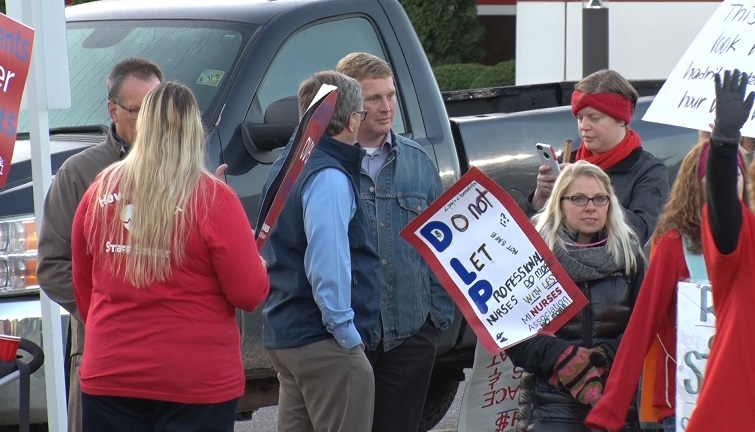 During their time in Lansing, Casperson and McBroom sponsored a series of bills called the Safe Patient Care Act. The bipartisan legislation would require hospitals to disclose RN to patient ratios and would also place limits on forced overtime.

Casperson, who used to drive logging trucks, says the number of hours truck drivers can drive are regulated by the government and that same principle should apply to the nursing industry.

“Why would it be any different when you’ve got nurses that are pulling 12-hour shifts on a regular basis and then all of a sudden they’re asked to stay for a 16 (hour shift) after they just pulled three 12’s,” said Casperson. “And this isn’t happening on occasion. This is happening a lot,” he added.

“We have safety regulations for so much else in life, why don’t we have safety regulations when it comes to taking care of folks?” said Ed McBroom, a former state representative who is running for state senate. “Hospitals, they have important issues, they’re trying to make a bottom line too, but when it comes to staffing, that’s not something that should be allowed to be skimped on,” said McBroom.

According to Casperson, the nurse’s strike is starting to garner attention across the state.

“They have now gotten themselves noticed,” said Casperson. “Now, if people look at what they’re talking about and really listen to them, they will realize the cause is noble and it’s really something worthwhile.”

“It just seems the position that’s being taken from the administration is illogical,” said McBroom. “Why would it be a good thing to overwork and under staff, when our community, our family members, our friends, we ourselves end up in these places. We want to be well taken care of. And you’d think that’s what the hospital would want to see happen too.”

Man sentenced in connection with break-in