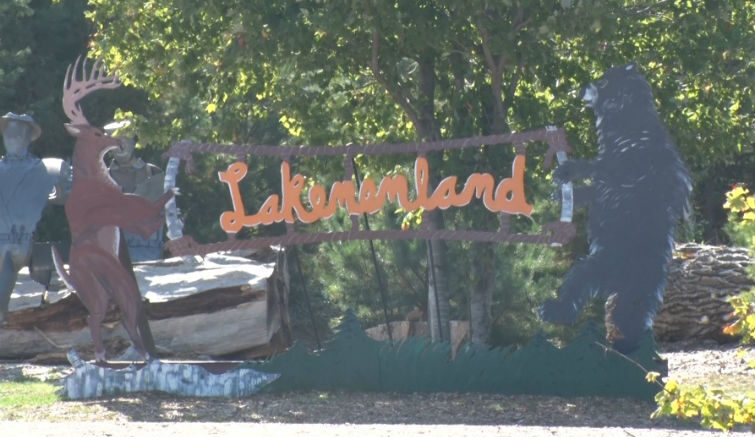 MARQUETTE — ‘One man’s trash is another man’s treasure’ certainly is the mantra for one U.P. man who takes scrap pieces of metal and transforms them into what he calls junkyard art. ABC Ten’s Chelsea Birdsall caught up with Tom Lakenen, the artist behind the metal sculptures at Lakenenland, in this week’s feature.

Fifteen miles east of Marquette sits dozens upon dozens of metal sculptures, each and every one more unique than the last. The artist is Tom Lakenen and he owns Lakenenland Sculpture Park located on M-28. A welder by trade, Lakenen works in the construction field and has for most of his life. But about 20 years ago, he gave up drinking and started bringing home scrap metal from construction sites to create metal sculptures in his free time when he was laid off from work.

“It’s a hobby that keeps me from grabbing another cold beer or going to the bar or something,” said Lakenen. “That’s how it all started.”

Without much aim, Lakenen took the scrap too nice to go to the dump and constructed a variety of interesting pieces.

“You get this oddball stuff. I just throw it in the garage and here’s what you have to work with, what are you going to build, pretty much anything I can think of,” Lakenen said. “There’s a lot of times I’ll start on something and I’ll have kind of an idea or something and by the time I’m done, it’s totally different.”

Lakenen showcased his sculptures in his front yard until the early 2000’s when the township informed him that this violated an ordinance. But that turned out to be a blessing in disguise because in 2003, he purchased the property Lakenenland currently inhabits and started filling the space with his metal creations.

“It’s a hobby that’s gone wild,” Lakenen said. “I wish it would take off enough to where I could just be caretaker of the park and build sculptures.”

Lakenen says on average, his creations take between one and two weeks to construct, but some are built in just a day or two while other took up to six months, like the trio of lumberjacks hard at work. He builds the pieces himself, but gets a helping hand from his mother who paints them. The pieces vary, some being light-hearted and goofy, while others have a clear message, indicative of at large in the country.

“When Enron and WorldCom screwed everybody over, that’s when I made that big corporate greed pig,” said Lakenen. “That seems to be a favorite for a lot of people, especially little kids that don’t really know what it is – they just think it’s a pooping pig and they love it.”

But plenty of others are representative of the culture and heritage of the U.P. like the lumberjacks and the intricate creation honoring the many miners, past, present and future.

“It’s something to pay a little tribute to all the old timers that made their living underground and out working in the woods with the handsaws,” Lakenen said.

The park sits on snowmobile trail #417, which makes it a popular stop for sledders in the winter, who also take advantage of the bon fire area next to the pavilion. The pavilion was built a few years ago after a local doctor, Ken Buren, donated $12,000 for its construction. But what’s most astounding about the park is that it’s open 24-7, year round and is absolutely free to the public.

“I don’t ever want anyone to drive by with a bunch of kids and not stop because they can’t afford it,” said Lakenen. “It’ll always be free and open 24 hours a day. I don’t want to be like those tourist traps. Hopefully it just makes everybody’s trip to the U.P. a little more enjoyable.”

Lakenen says the public treats the park with high respect and he has yet to find graffiti, litter or any sort of destruction in fourteen years. The sculptures are not for sale, just for fun.

“I put a lot of work into all that – building the park and making the roads and everything,” Lakenen said. “You hate to do all that just for nothing. To see people enjoying it really makes it worthwhile.”

Lakenenland beckons all to the free art sculpture park