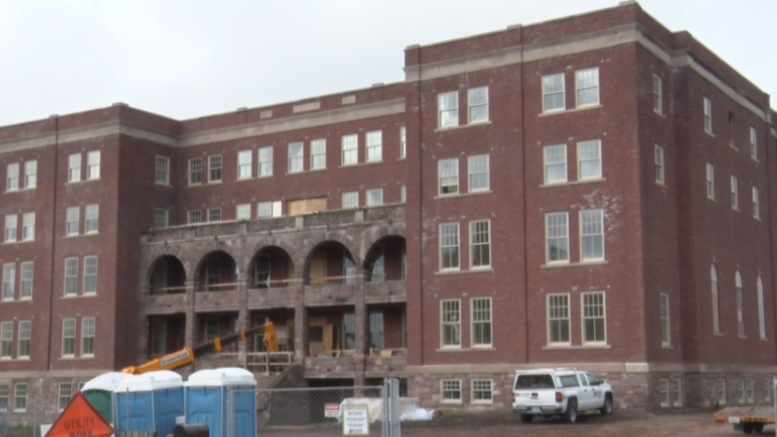 MARQUETTE — Completing construction on the Grandview Marquette Apartments has been delayed but the end is finally in sight.

Over a century old and overlooking downtown Marquette, the Grandview Marquette Apartments formally known as the Holy Family Orphanage has left a mark on the community.

“Grandview Marquette, the old Holy Family Orphanage is an iconic building. It sits up on the highest hill in Marquette and was purposely placed there to have a dominating presence in the community,” said Community Action Alger-Marquette Housing Services Director, Rod DesJardins.

Community Action Alger-Marquette is hoping to fill a need in the area through these new rental opportunities.

This $16 million project will consist of 56 units. 14 of these units will be set aside for special populations and 8 of them will be used for project based vouchers, which are individuals who have been chronically homeless or victims of domestic violence.

“6 of the units are for what is called, Section 811 Medicaid Waiver, these are residents who require in-home medical care that is provided by Medicaid and there are six units set aside of them. A balance of the apartments, the 40 remaining apartments are broken up into income bands based upon the area median income for the county of Marquette,” said DesJardins.

“These are for young working families who make anywhere between $25,000 and $30,000 a year. We still have vacancies for two bedroom and three bedrooms. We’re actively recruiting people who work downtown so they can live where they work,” said DesJardins.

Maintaining the exterior façade of the building is giving each tenant the opportunity to have a completely different view of the city.

“One unit that used to have the stage for the auditorium, that stage is preserved within the unit which makes it incredibly unique. There are only two or three units that are the same or are mirrored images of each other,” said DesJardins.

Since beginning the project over a year ago, community members have been anxious to get a peek inside.

“We have a lot of people interested in living there who quite frankly, there income is too high for them to qualify to live there. We have a lot of interest from people who were orphans in that building who want to just go back in and see it,” said DesJardins.

Although people are invited to take a look after the apartments officially open, it will most likely be unrecognizable.

“The one architectural feature aside from the auditorium that we have preserved is the original terrazo floors in the passage ways, which are incredibly beautiful,” said DesJardins.

After a rainy spring, the opening for the apartment has been pushed back to November 10th with hopes of tenants moving in at the end of November. Now with the end in sight, officials are looking forward to the structure returning to its original glory.

“When we get done with it, it will once again be a dominate landmark and serve as an essential function for the people of Marquette,” said DesJardins.

The previous Holy Family Orphanage has been embedded in the community’s history and will continue to catch the eye of passerby’s as the Grandview Marquette Apartments. If you are interested in applying to live in these apartments, you can find further information by clicking here.