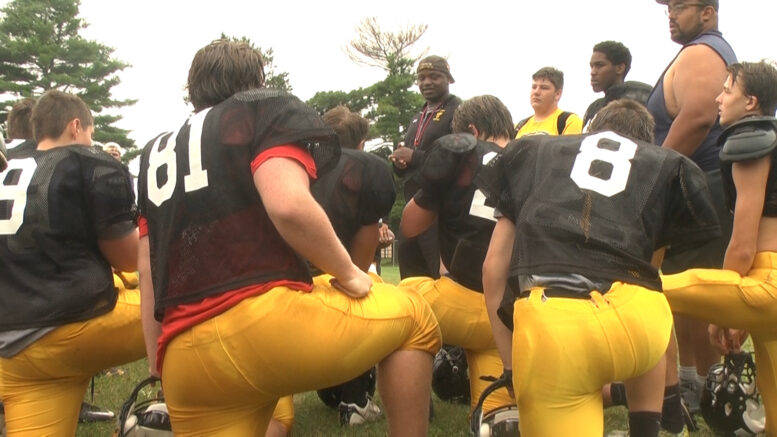 GWINN — 6,188 days…that’s how long it had been since the Modeltowners participated in a playoff football game and the effects of last year’s successful run are still being felt today.

“It made everybody believe. They all believed in each other. It’s no secret. It took hard work and dedication. I had to be here a lot. I had to sit down with a few parents. But it just showed that hard work pays off. A lot of people say that if you work hard, good things will come. It actually was the truth here in Gwinn,” head coach Dion Brown said.

“We had a lot of adversities last year with not a lot of players and a bunch of weeks that didn’t go our way. But each week we came back and wanted to win another one and kept on working hard each week,” middle linebacker Logan Kruhlik said.

“After that big dry spell, after coming back and finally getting a winning season and making it to the playoffs, it livened up definitely the town, but it brought a lot more soul to the players on our team,” said defensive end Daniel Johnson.

“I watched these kids, Monday through Friday, hit the weight room, come out here and run, and be that team unity that teams talk about. They actually had it,” Brown said.

And now this year’s team is wrapping up the first week of practice with that same enthusiasm from last year.

“It feels good. I’m glad to be out here in full pads finally. It’s been a brutal summer, but I finally get to hit some kids and learn some more stuff. It’s a good week,” said Kruhlik.

But with that excitement comes new changes as the Modeltowners will only have one senior from last year’s team.

“It means a lot. I’m used to being under my brother [Ryan Johnson], the big varsity player. I’ve always been used to being the little guy. So being on a big leadership position is a lot better, and being able to teach the younger guys something that they haven’t learned yet. And being able to step up and be a bigger man,” Johnson said.

Gwinn definitely wants to be back in the playoffs, but their new goals include a conference title as well.

“I think we got a chance, more than ever, since I’ve been coaching. I know we got a really good offensive and defensive line because that’s the part where we brought back four out of five starters back and then we also got a really good tight end in Tucker Taylor. We bring those guys back. Then it’s just implementing a few skill guys. It’s going to be hard but we just got to compete,” said Brown.

The Modeltowners will open their season at home on August 25th against Gladstone.

Miners looking forward to a new schedule in 2018

Miners open football practice with redemption on their minds