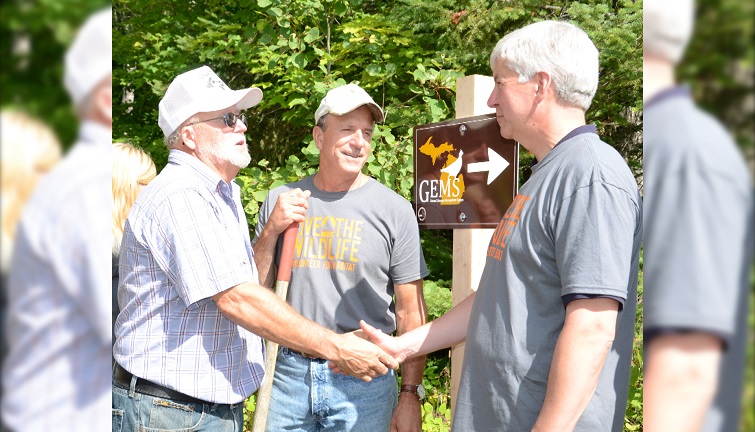 The award was presented today at a quarterly UPSA meeting at the William Anderson Sportsman’s Club in Hermansville in Menominee County.

Ettenhofer, who serves as treasurer of U.P. Whitetails Inc., was given the award in “deep appreciation” for his vision, dedication, perseverance and guidance for wildlife, habitat enhancement and chronic wasting disease (CWD) education and prevention work.

“Without your efforts, the Upper Peninsula would not be what it is today,” the award plaque states.

Ettenhofer has amassed numerous accomplishments and has made significant contributions to a wide range of projects.

He helped form seven U.P. Whitetails organizations. He serves as chairman of UPSA’s CWD committee. He has been a leader in educating the public on CWD, including producing a radio public service announcement and testifying before the Wildlife Committee of the Michigan House of Representatives on the problem of potential importation of CWD-infected, improperly processed, deer to Michigan.

Ettenhofer has been a leader in securing grant funding to enhance white-tailed deer habitat in the Upper Peninsula. Among these projects, habitat was improved along the Whitefish River and in the Arnold area of Marquette County. Tree planting efforts have also been undertaken via the Forestland Group and Marquette and Delta counties’ conservation districts. Grant money has also helped fund deer trapping and tagging work.

“Al is a tremendous and tireless worker for conservation and wildlife in the Upper Peninsula,” said Tony Denboski, UPSA president. “He is a fantastic choice for our first-ever ‘Outstanding Conservationist’ award.”

The Upper Peninsula Sportsmen’s Alliance was formed in 1982 to unite sportsmen’s groups in the region for a common cause. Today, the group is composed of 57 clubs and businesses, representing 49,000 members.

The alliance’s mission is to be the voice of U.P. sportsmen and outdoors users to promote, foster and advance the outdoor recreation experience, encouraging conservation of natural resources and the environment to perpetuate the direction of management and use, for the benefit of future generations by educating UPSA’s members, youth and the general public.

The organization cooperates, when appropriate, with local, state and federal resource management agencies, encourages communication with the DNR on policy issues and respects the rights of landowners.