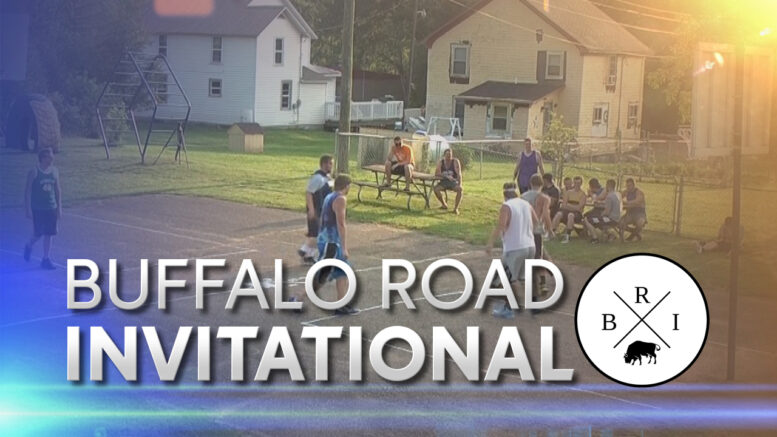 NEGAUNEE — Three–on–three basketball, up to 11, win by 2, behind halfcourt is two points, everything is else is one point. And if you can hit the side of the backboard, you get half a point. These are the rules at this weekend’s second annual Buffalo Road Invitational.

“It kind of just became the cool, funny thing to do. You come out here and play on a court that’s kind of…we like to say it’s weathered. It’s seen some days and the rims kind of hang low. But that kind of adds to what’s fun about it,” tournament organizer Doug Lindblom said.

The tourney features 10 teams made up of Negaunee natives from the past and present who enjoy the experience of playing on this court.

“I used to play here with my friends. It was fun to see who can could do the coolest moves. Definitely watching everyone out here on that day, it’s really competitive and it’s really cool,” said Brock Aho.

“This court has soul. The players that play here and put in their blood, sweat and tears, they have soul, too. It’s our home court. We’re allowed to play hard here and do our thing and be friends,” Daniel Bingel said.

The players are hoping this year’s installment can top last year’s unexpected success.

“It was pretty lit I would have to say. Everyone was here and it was super cool. It was kind of like a community thing. It was a cool time,” Aho said.

“It’s just one of the most prestigious basketball tournaments I’ve ever heard of. So many of my favorite players are playing it, and just to have the opportunity to play in it myself is just amazing,” said Bingel.

“I think that kind of has to do with this community and what it will support and what it enjoys to do,” Lindblom said.

So are there any future plans to renovate the court? Most of the players give that common question a hard “no”. The tournament starts Sunday at noon and admission is free.